Chapter 2 - The Sheriff and the Widow

Scene 1 The Hotel de Paris at the breakfast table.

The group is sitting around a table eating a quick breakfast . Up walks a man looking a little “worse for the wear”. His suit is very dusty and has a couple of recent, small tears in it. And he has a good size bruise on high on left cheek under the eye. He is tall, thin, and has a wiry mustache. He introduces himself as Reginald T. Richardson and says that he is a travelling minstrel passing through town on his way to perform in San Francisco. Says that as he was riding into town late last evening, his horse was spooked and threw him off. The horse ran off and in doing so, tripped over a rock and came up with a broken leg. He had to shoot his horse and walk into town. He walked into town and decided to spend the evening with Pauline, a lovely lady from The Faded Rose. Pauline told him about Nurse Jane Wilson and that she was better than either of the doctors in town. He would like to catch the next stage coach out of town and would like for her to look after him “real fast like” so he can get on his way.

He will also over-pay for Nurse Wilson’s services.

Scene 2 As the group leaves town …

Corbett and three deputies meet the group about 10 minutes out of town. They are blocking the road so the party cannot get through. Corbett will lean over his pommel and say that he is concerned that “You all have created your own little ‘ill-legal’ posse and the punishment for that is a month in the county jail. And that’s if Judge Searls is feeling kind. I should take you all in and right now!” He will them go on to say, “Now I think you all just either need to go back into town and get about your own business. Or maybe Nevada City would be better off if you all just moved on somewhere. You know Jane … there are whores to look after in every town. And Gilbert every town has horse stables you can muck out. Jess, as pretty as you are you might … well now I think you might make a good wife.”

The party blusters through with their (real but valueless) gold claim – seeing no way to force them back, Corbett huffs and puffs and lets them pass.

Scene 3 On the road again …

An hour (or two) past where the group ran into Corbett, outside of town they run into a husband, wife, with two small children. Two horses lay shot dead that used to pull their wagon. The wife is sobbing and their wagon looks like it had a small fire on one of the wheels. The kids are trying to make momma stop crying and the husband looks beat up and dazed by a small camp fire.

They are heading west so the husband can strike a claim and his wife mind the children as they make their mark in California. They tell a story of a tall, thin well-dressed man they came up to at this point in the road and he was sitting next to this fire; late yesterday afternoon. They stopped to offer him a small bit of food they had and then proceed into town for the night. As soon as the wife offered him a plate, he grabbed her and put a knife to her throat and said he was taking all their cash. The husband was able to make a jump at him and a tussle broke out. The husband was able to land a good right hook, but the thin man was better and landed a mean uppercut that knocked the husband down and he hit his head on a rock and was out cold. The man then shot their horses, stole all their money (they actually had a decent amount as they had saved really good), tied up the wife and kids to a tree nearby and then threw a branch from the fire at the wheel of the wagon.

Up to the PC’s to take it from here…what do they do??? 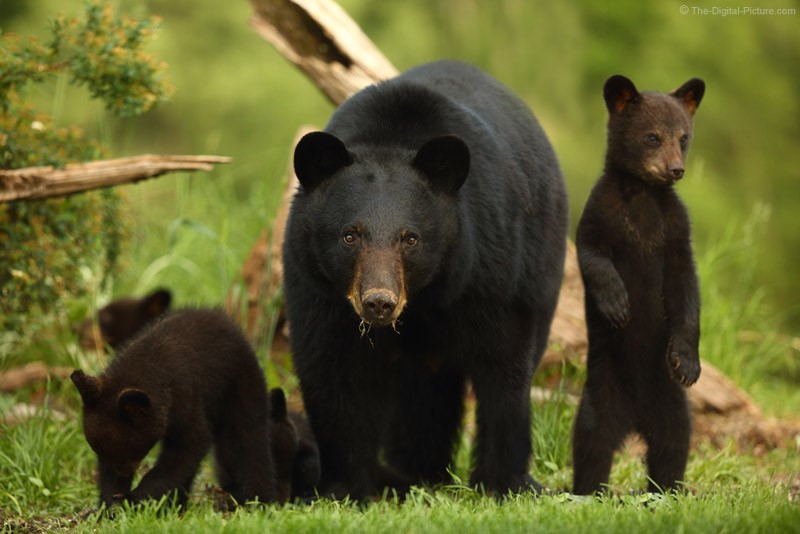 Group stops meal by a creek side. Two black bear cubs coming splashing down creek chasing a fish and finally catch it right in front of the group. After two rounds of the cubs catching their fish and playing with it, their mother bear comes out of the woods on the other side of the creek. She is the largest black bear anyone in the party has ever seen, standing taller than the PCs.

Her immediate action upon seeing the party is to let out a mighty roar and stand up on her hind feet.

Next round the cubs run behind their mother (medium cover +4) and the horses will spook.

Mama bear does not want trouble. She will move to light cover (2 to defense) in the underbrush the following round – then all bears move to higher cover each round (4, +7, +10 to defense). If the PCs have not started following at this point then the encounter is over.

In actuality, Jess gets a lucky shot (critical) and drops the mama. The little ones scamper off into the woods – to get picked up by coyotes.

Scene 5 Everybody gets wet

Skinning and preping mama bear delays the party several hours. Shortly after they finish, the cloudy skies start to open up in a light but constant rain. The closest ford to the Yuba River is already starting to flood and water is speeding up.

Gilbert and sure-footed Darley cross first – despite some difficulty, they manage across and declare the river … well not exactly safe … but they ain’t gonna find better unless they plan to wait a day or two.

Jost and his mule start across, and the water is visibly rising as they do so (GM: Riding rolls to cross, REF save if you miss to stay horsed, REF save and d4 grit as you are passed down the river. DC goes up for each character.) Sam manages to fall off his horse, and gets a little banged up. Jess gets the worst of anyone, getting swept downriver and thrown against the rocks until she drags herself exhausted up against the bank.

The cold, wet, exhausted party makes camp to dry out. They are far short of their goal – but still in good spirits.

There are a couple of fish hanging from a line on one side, a clothes line on the other, a small fire just outside the cave mouth. One horse tethered loosely.

If the group arrives in the AM, they will see Lucy & Lilly just walking around the campsite doing normal mother and young daughter things. If they watch for more than an hour, Plummer will return with a pail of water in one hand and a couple of logs under the other.

They will go about the rest of the day doing things a family would do. Plummer will bounce Lilly on his knee, play peek a boo with her, and will basically entertain the two until Lilly gets hungry, or fussy, or needs to be changed. He will promptly turn Lilly back over to Lucy for her to “mother her”.

What do the PC’s do…

NOTE: would love to get a recap of the combat

Scene 7 Meeting Corbett in the woods

Corbett was waiting to ambush the party – but they outsmarted him and took the long way around back to town.

They reach Nevada City two days later, but no deputy in town to deal with.

Not vigilantes, we are concerned citizens. Nurse Jane Wilson

Now we introduce three new NPCs. The doctor (Hunt), the prosecutor (MacFarland) and the judge (Searls).

Garrett’s remembrance of the big fight:

Overcast with a minor amount of mist and fog. Party saw the house and spotted an animal; presumed to be a horse.

Party decided to ‘flank’ and come up to the house from the side with the horse. Bear trap was sprung as we approached, not sure who almost got ‘bit’ by it.

Gilbert and another, John Jost?, fanned out to the right while the others continued forward. Plummer issued a verbal challenge for us to halt from mouth of cave.

Gilbert bought the party time as he verbally fenced with Plummer. Party continued towards house using it for cover.

More shots were fired as the party engaged Plummer from a distance.

Garrett moved to Darley, grabbed the reins, and moved to the back of the house.

Garrett remembers dismounting and charging for the mouth of the Cave, but can’t remember if he went thru the house.

Lucy joins the skirmish with a gun in hand. A child is with her.

Garrett has memory lapse at this point, but remembers the child breaking away and running, Lucy breaking down in tears, and Plummer saying they talked about this and that he wasn’t gonna hang for her.

As Plummer draws a bead on Garrett, Jess guns him down in defense of a fellow ‘concerned citizen’.

Jess calls for the aid of Nurse Jane who promptly arrives and skillfully draws Plummer back to consciousness.

Plummer’s guns are confiscated as he is hog-tied to a travois for shipment back to town.

Chapter 1 - Shot in the Dark

Backstory on the PCs