Gilbert was flush with cash as he walked the streets of Nevada City. And every dollar burned a hole in his pockets. First things first, Gilbert made arrangements to purchase the best saddle and bridle set the city had to offer, he also had a pair of special riding spurs made. Darley deserved the best and Gilbert intended to that he had it. The spurs were blunted on the ends so as to not damage Darley’s pristine coat. The saddle was made and remade to Gilberts demands and to fit Darley perfectly. While he was working on the saddle with the leatherworker, Gilbert started to fill bad and purchased an expensive holster. After all, Gilbert had made him remake the saddle twice now, but finally he had got it just right. The holster fit so that it was on his left hip with the grip (handle) facing towards the belt buckle. It wasn’t the way most people wore their pistols, but Gilbert knew it would make him stand out and more importantly, the cross body draw worked for him.

Next Gilbert went and purchased a fine Stetson with was a dirty grey in color. As he walked out of the store with his new hat and recently cleaned clothes. Gilbert felt like an important man about town. Gilbert knew he wasn’t yet the biggest horse breeder in California, but he was well on his way.

As he walked through the town, he couldn’t help but feel that he something was just not right. This pain was eating at him. That pain was right above that brand new holster on his left hip. That pain was caused by the wound that (Former) Sheriff Henry Plummer has created when he caught Gilbert with a shot from his pistol at the old abandoned mine. No matter how he tried to carry himself or ride Darley, that wound always caused a twinge of pain.

Gilbert knew it was only because of the doctoring skills on Nurse Jane that he was still even alive to be able to walk down the streets of Nevada City.

Without knowing it, Gilbert had stopped walking down the street and was actually staring into the window of the finest women’s clothing store that Nevada City had to offer. Gilbert walked right in and purchased the fine women’s jacket he had been staring at in the window. He had the shop keeper wrap the jacket up and Gilbert started to walk straight to the Hotel d’Paris where he knew Nurse Jane would be eating dinner. 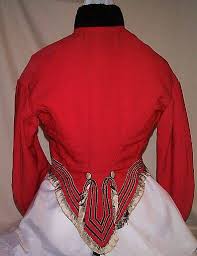 Gilbert stepped right up to Nurse Jane who was eating dinner with Samuel Davis as they most always did on weekday evenings. “Nurse Jane,” Gilbert said with a broad smile on his face, “I owe you for what you did for me. You know patching me up and all. And ma’am if it weren’t for you…well…I might not…well, you know…I might be in a most horrible way. And to say thank you, well…I wanted you to have this!” With that Gilbert handed Nurse Jane a wrapped package. As Nurse Jane opened it, inside she saw a beautiful and detailed Zouave Jacket (which were all the fashion these days).

Chapter 3 - Treasure of the Sierra Nevada

Chapter 2 - The Sheriff and the Widow