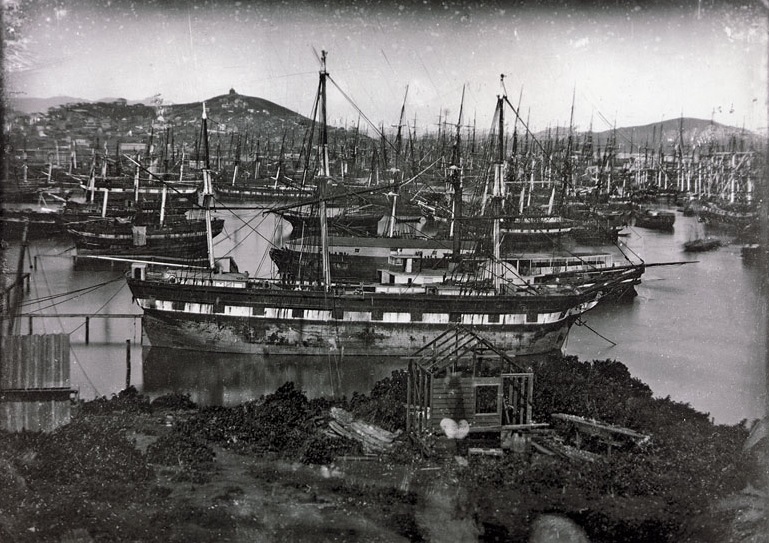 Sam Davis sits alone in the parlor of a boarding house. Heavy fog hides the sun, and he distractedly reads the paper by candlelight.

“General Johnston to be appointed head of the Department of California following the successful conclusion of the Utah Rebellion … etc, etc … no mention of our good work, naturally. India continues to rebel, the East India Company may lose their charter and Parliament may appoint a Governor General … hmm, hmm. Governor Denver submits to Congress … new territory of Colona … from 103rd line of longitude west and north from the border of the Mexican Territory … hmm, without settlers or industry it will never prosper.”

“Professor Anderson, Great Wizard of the North … to arrive direct from his engagement in Australia … wonder what sort of quackery he will be peddling.”

“The Pioneer Racetrack is running a derby on April 4th … Darley must be too old to race by now, but I expect Gilbert will make a go of it. Oh, and look at this … ‘Lawyer, just imported from England at 16 hands 2 inches by W. Hood of Sonoma. With bay coat and black main and tail. A sure foalgetter’. Harumph! Warfield best start advertising his stud service – before the competition takes all the servicing.”

Looking at the grandfather clock, he finally notices the time and jumps up. Grabbing his hat, coat, gloves and umbrella Sam makes for the door. “Mr. Jones, your boy is too late with the cab. I will have to walk if I’m to make my appointment with Mr. Taylor.”

He turns around and bumps into a boy no more than ten wearing a Wells Fargo cap. “Beginning your pardon, sir, but do you know a Mr. Samuel Davis of Baltimore? This letter come for him special delivery”.

Crossed out addresses and postal marks fill the front of the letter. Addressed to Nevada City with a Butterfield Overland Express postal mark, the letter has been to Nevada City, Sacramento and Folsom. It has been in California at least a month – and is a miracle it ever found him at all.

“Mr. Davis, thank you for waiting. Please come in now. Can I get you anything? You seem distressed.”

“Never mind, just a bit of coal smoke got in my eye on the walk over. Never you mind. What I would like to get are some answers to this ‘matter of some delicacy’.”

Sam finds the office already occupied. A man in his late forties who is half-bald with piercing eyes greets him.

“That’s my fault, and I apologize for the subterfuge. Mr. Davis, I am Henry Halleck. We have not met, but my brother-in-law Captain Hamilton speaks highly of you.”

“He believes we may become good friends and find mutual aid, and that we might find our principles aligned in surprising ways. But I am always frank, so I shall tell you that I have my doubts.”

“You see, I know that you are Maryland-born, Baltimore-raised. Now I hold that no man may choose the manners and temper of his parents, so it is unjust for me to count those against you. But what a man does when he leaves his childhood home is another matter entirely. But like most her native sons you swear allegiance to the Bishop of Rome, and my friends tell me that you are devout – or at least devout enough to attend mass.”

“And so now I come to the question on which our future friendship and mutual aid depends – and in this I will be forthright and plain. And should you take offense I ask forgiveness and give you leave now, and we need never discuss this again.”

“Do you accept the teaching of Pius IX who sits on the Holy See today and says that ‘slavery itself is not in its essential nature contrary to natural or divine law, that there can be several just titles of slavery, and that it is within the natural and divine law for a slave to be bought and sold’?”

Samuel sits down, stunned by the temerity of the question, and ponders a response. After a minute, he begins.

“Sir, I do agree with you that a man’s actions define who he is and as such may be the primary source of knowledge about that man’s character. I have read several of your papers, including your report on the coastal defenses on the Pacific, so I am aware that you are a quite learned and capable man. I would ask therefore that you judge me by my actions and personal beliefs.

I am aware of what the Holy Father has written and feel that perhaps his words have been taken out of context. For while he is addressing what scholars in the church have struggled with for centuries, he also defines slavery as acceptable only under certain conditions. I for one do not believe those conditions are present in the south, and must take a moral stand against slavery. In fact, the Holy Father, Gregory XVI, stated:

“no one in the future dare to vex anyone, despoil him of his possessions, reduce to servitude, or lend aid and favour to those who give themselves up to these practices, or exercise that inhuman traffic by which the Blacks, as if they were not men but rather animals, having been brought into servitude, in no matter what way, are, without any distinction, in contempt of the rights of justice and humanity, bought, sold, and devoted sometimes to the hardest labour.”

I am aware of the general consensus that the Catholic Church does not condemn this hateful and inhumane practice. I, sir, do so."

Halleck wrinkles his brow, and a large smile spreads across Taylor’s face …

“You really said that Davis?” Gilbert says through a shocked expression. “What did he say to that?”

“Well then Halleck opens up with ’Bless you, Taylor. You were right’. Then Taylor pulls out a bottle of scotch – the real stuff, from the highlands – and starts pouring glasses. It might be early, but how could I refuse? Then they lay into a story about the Manumission Society of New York. The founding history with John Jay and Alexander Hamilton is well known, of course -”

“Well, yes of course – but maybe just remind a me a little”

“So they had great success in changing the New York constitution. But by the 20s the New York had declared the trade illegal, enshrined it in their constitution, and all but a handful of elderly slaves had been manumitted. So group discussed dissolving. Then the Illinois constitutional fight appeared in 1824 – and they realized the real fight was in the west. Slavery had to be contained or it could never be defeated.”

“So they became the money behind the ‘free soil’ movement. Halleck settled in California after the war, and helped launch the Republican Party of California.”

Sam then describes how Halleck and Taylor believe slavery can be eradicated in their lifetime. The split in the Democratic Party is permanent and the 1860 census should cement an anti-slavery majority. The president in 1864 could be Republican, and the federal government will become abolitionist. Southern plantation owners will certainly object, and local insurrections are almost inevitable – but as long as the west and its gold remain secure, the United States are certain to become truly free.

… and then … a noise from the front of the saloon.