Owner of the Guajome & La Jolla Ranch (outside San Diego)

Cave Johnson Couts is a wealthy landowner whose cattle roam 20,000-plus acres of grazing land in northern San Diego County. His demeanor and businesses are all run with military precision. He and his wife Ysidora have several children, and his home is widely regarded as having great hospitality.

Couts was born near Springfield, Tennessee, November 11, 1821. His uncle, Cave Johnson, was Postmaster General under President Polk, and had him appointed to West Point, where he graduated in 1843. He served on the frontier until after the Mexican War, and was then at Los Angeles, San Luis Rey, and San Diego from 1848 to 1851. In 1849 he conducted the Whipple expedition to the Colorado River.

In October 1851 he resigned from the army and was soon after appointed colonel and aid-de-camp on the staff of Governor Bigler. In the Garra insurrection he served as adjutant, and at the court martial was judge-advocate. He was a member of the first grand jury September, 1850, and county judge in 1854.

In 1850, San Diego established a city charter – and Andrew B Gray & William Heath Davis received approval to establish their townsite at “New San Diego”. Coats bought into one of the most valuable properties (689 acres called the “Middletown tract”) with eight other investors including his future father-in-law. He also worked with his friend and drinking buddy Joshua Bean (alcalde of San Diego, and 1st mayor) to buy public land in Old San Diego, though San Diego later bought back city hall at a tidy profit to Bean & Coats.

In 1853 he removed to a tract known as the Guajome grant, a wedding gift to his wife from her brother-in-law, Abel Stearns. Having been appointed sub-agent for the San Luis Rey Indians, Colonel Couts was able to secure all the cheap labor needed for the improvement of his property. His business affairs were managed with skill and military precision, and he became one of the wealthiest men in Southern California. He purchased the San Marcos, Buena Vista, and La Jolla ranchos, and also government land, amounting in all to about 20,000 acres.

On April 5, 1851, he married Ysidora Bandini, daughter of Juan Bandini, of San Diego.

He entertained Helen Hunt Jackson in the 1870s while she was collecting materials for Ramona, and part of the story is supposed to be laid at the Guajome rancho. 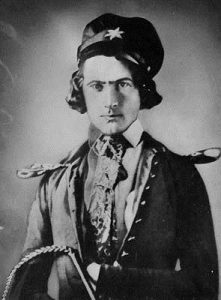