Henry Wager Halleck (b. January 16, 1815) was a United States Army officer, scholar, and lawyer. A noted expert in military studies, he was known by a nickname that became derogatory, “Old Brains.” He was an important participant in the admission of California as a state and became a successful lawyer and land developer.

Halleck was born in rural New York (Oneida County). He detested the agricultural life and ran away to be raised by an uncle. He attended Hudson Academy, Union College and then West Point – where he graduated 3rd in the class of 1839.

He joined the engineering corps and spent several years improving the defenses of New York Harbor. His reports on seacoast fortifications raised the attention of Gen Scott, who sent him to France in 1844 to study their fortifications. On his return, he published one of the first military scholarly works in the US and gave a lecture series in Boston – this earned him a reputation as an academic and the nickname “Old Brains”.

Halleck was assigned to duty in California. During his seven-month journey on the transport USS Lexington around Cape Horn, assigned as aide-de-camp to Commodore William Shubrick, he translated a biography of Napoleon which further enhanced his reputation for scholarship. During the trip, Halleck also had the opportunity to become good friends with William Sherman and Edward Ord.

Once in California, his initial responsibility was overseeing the construction of new fortifications in/around San Francisco. He did eventually see combat – in November 1847, he was involved with Shubrick’s capture of the port of Mazatlán.

He was transferred north to serve under General Bennet Riley, the governor general of the California Territory. Halleck was soon appointed military secretary of state, a position which made him the governor’s representative at the 1849 convention in Monterey where the California state constitution was written. Halleck became one of the principal authors of the document. The California State Military Museum writes that Halleck “was [at the convention] and in a lone measure its brains because he had given more studious thought to the subject than any other, and General Riley had instructed him to help frame the new constitution.”

He was nominated during the convention to be one of two men to represent the new state in the United States Senate, but received only enough votes for third place.

During his political activities, he found time to found a law firm in San Francisco with Archibald Peachy, Frederick Billings and Trenor Park. The firm became so successful that he resigned his commission in 1854.

Halleck became a wealthy man as a lawyer and land speculator, and is a noted collector of “Californiana.” He obtained thousands of pages of official documents on the Spanish missions and colonization of California.

He also serves as an officer of the Almaden Quicksilver Mines (San Jose) and owns a 30,000 acre ranch in Marin County named “Rancho Nicasio”

The Montgomery Block is San Francisco’s first fireproof and earthquake resistant building and is located at 628 Montgomery Street, on the south-east corner of its intersection with Washington Street. [NOTE: today this is the location of the Transamerica Pyramid.]

The four-story building was erected in 1853 by Henry Wager Halleck in the “Barbary Coast” red-light district. Also known as the Monkey Block, it used to house many well-known lawyers, financiers, writers, actors, and artists like Lola Montez and Bret Harte.

The four-stories Montgomery Block was the tallest building west of the Mississippi River when it was built in 1853. It was designed by architect G.P. Cummings. San Franciscans called it “Halleck’s Folly” because it was built on a raft of redwood logs.

On May 14, 1856, the editor of the Daily Evening Bulletin, James King of William, died in the Montgomery Block, having been shot by James P. Casey, a city supervisor who felt slighted by King’s anti-corruption crusading journalism. 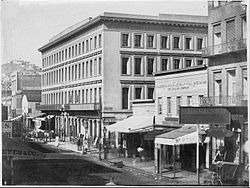 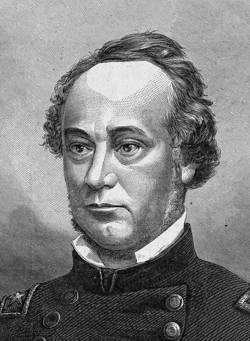