Henry Plummer features prominently in the first two RESOLUTE adventures – Shot in the Dark and The Sheriff and the Widow. As a result of these adventures, he has lost his job as sheriff, fled Nevada County and his whereabouts are unknown. These reverses he blames squarely (and accurately) on the shoulders of the party.

Henry Plummer (b.1832) was born in Addison, Maine to a family that had settled in Maine in 1764 when it was still a part of the Massachusetts Bay colony. He changed the spelling of his surname after moving West. His father died while Henry was in his teens.

In 1852, age 19, he headed west to the gold fields of California. His mining venture went well: within two years he owned a mine, a ranch and a bakery in Nevada City.

In 1856, he was elected sheriff and city manager and it was proposed that he should run for state representative as a Democrat. However, the party was divided, and without its full support, he lost. 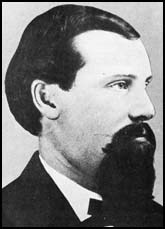