Features prominently in the climax of the Mountain Meadows – but escaped with his life.

Flees with half the Iron County sheriff’s department. He’s rumored to be hiding out in the Mexican territory under aliases with the two junior officers (Bill Stewart & Joel White) who were in charge of “sweeping the field” to take care of anyone missed by the fusillade and likely to escape the meadow. They are believed to be living off money they looted from the bodies. 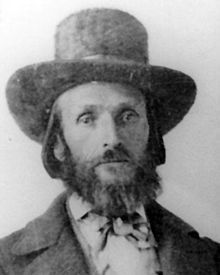