Jess defeated many of Johnson’s friends during the 1858 election and her work in Sacramento.

John Neely Johnson (born August 2, 1825) is a lawyer and politician. He was elected as the fourth governor of California in 1856 and is a member of the American Party, an anti-immigrant group also called the Know-Nothings.

Born in rural Gibson County, Indiana, Johnson never attended University; while born to a prominent family, his plans for his studies were foiled by economic effects of the Panic of 1837. He apprenticed a printer before moving to Iowa to work with a lawyer, and was admitted to the Iowa Bar. In July 1849, Johnson left Iowa for the Gold Rush in California, where he briefly employed himself as a gold prospector, and later as a mule train driver.

Johnson restarted his law career in Sacramento, California by founding a law practice with Ferris Forman, and was elected as Sacramento City Attorney in 1850. After two years in the City Attorney’s office, Johnson began his political career by running as a Democrat in the 1852 election, in which Johnson was elected to the California State Assembly as one of four members representing Sacramento.

In the 1855 general elections, the American Party hoped to capitalize on the disintegration of the Whig party, Democratic divisions and growing anti-Catholic sentiment. They nominated Assemblyman Johnson as its candidate for Governor of California. Johnson ran against incumbent Governor John Bigler, and Johnson secured the governorship by a comfortable margin. Johnson was described as “the most startled man in the state” upon hearing of his election. Along with the governorship, Know Nothings also received considerable gains in the California State Legislature, as well as elections to every other major executive post in the state, including the offices of Lieutenant Governor (Robert M. Anderson), Attorney General (William T. Wallace), Treasurer (Henry Bates), and Controller (George W. Whitman).

Since the early 1850s, tensions within San Francisco political circles had sometimes erupted in open violence. Distrust of city authorities again reached the surface on May 14, 1856, when James King of William, editor of the San Francisco Bulletin and a vocal critic of corrupt officials, was mortally wounded by James P. Casey, a purported ballot-box stuffer and city politician.

When Casey was in the custody of San Francisco law enforcement, William Tell Coleman, a ringleader in the 1851 Vigilance Committee and another vocal critic of municipal authorities, called for the formation of another Vigilante Committee. Vigilantes erected a barricade along Sacramento Street to repel city officers from removing them. After a week, the Vigilantes marched on the city jail and overpowered its guards to arrest Casey, along with another criminal: Charles Cora, who had fatally shot a U.S. Marshal the previous year.

Johnson traveled to San Francisco from Sacramento along with his brother William and the newly commissioned chief of the California Militia, William Tecumseh Sherman to meet the Vigilante Committee ringleaders. After personal negotiations between Governor Johnson and the Vigilantes over transferring the criminals to state law enforcement failed, Johnson watched helplessly as both Casey and Cora were hanged by the Vigilantes on May 20.

Johnson returned to Sacramento, and the Vigilantes refused to disperse, claiming they were San Francisco’s rightful law enforcement. Johnson instructed General Sherman to call the California Militia to San Francisco on June 2, and issued a gubernatorial proclamation declaring San Francisco in a state of insurrection the following day. When that order failed to disperse the crowd, Johnson ordered John E. Wool of the U.S. Army’s Department of the Pacific based in Benicia to dispatch weapons to the state militia.

General Wool declined, claiming that the Governor did not have the authority to use arms from federal soldiers because that right laid exclusively with the President. Both Johnson and Sherman were furious about General Wool’s refusal to lend arms for state militia forces: Sherman resigned from his military commission, vowing never to return to California politics.

The Vigilantes remained San Francisco’s de facto law enforcement until August 1856. Vigilantes arrested Chief Justice David S. Terry of the Supreme Court of California for stabbing a Vigilante member, and hanged two more individuals. Governor Johnson revoked his proclamation on San Francisco’s insurrection on November 3. Despite denouncing the Vigilantes and their rebellion against city authorities, Johnson did agree to unite the city and county of San Francisco into a single entity to minimize corruption. The result was the passage and signing of the Consolidation Act of 1856, uniting county and municipal authorities.

The Vigilante Crisis in the summer of 1856 overshadowed the rest of Johnson’s term. Despite the fact that a large portion of the State Legislature were Know Nothing party members, Johnson vetoed a bill due to its “bad spelling, improper punctuation and erasures.” Johnson also approved funds to build the future California State Capitol. By 1857, Know-Nothings were frustrated with Johnson’s inability to deal with the San Francisco Vigilantes. During the American Party’s convention in 1857, Johnson lost the party’s nomination for the governorship to George W. Bowie. 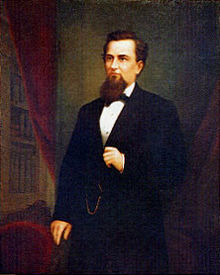