James Pierson Beckwourth (b. 1798 or 1800?) is a mountain man, fur trader and explorer. He was born in Virginia, the son of Sir Jennings Beckwith a descendant of Irish & English nobility. James was apprenticed to a blacksmith until age 19 but was fired by the artisan after getting into an argument with him.

Jennings Beckwith moved to Missouri around 1809, when James was young, taking his mother and all their children with him. Although Beckwith raised his mixed-race children as his own and acknowledged James as his son, he legally held them as master. He freed James Beckworth by manumission, by deed of emancipation in court in 1824, 1825, and 1826.

The Fur Trade & Life Among the Crow

In July 1825, rendezvous, trapper and colleague Caleb Greenwood told the campfire story of Beckwourth’s being the child of a Crow chief. He claimed Beckwourth had been stolen as a baby by raiding Cheyenne and sold to whites. This lore was widely believed, as Beckwourth had adopted Native American dress and was taken by some people as an Indian.

Later that year, Beckwourth claimed to have been captured by Crow Indians while trapping in the border county between the territories of Crow, Cheyenne, and Blackfoot. According to his account, he was mistaken for the lost son of a Crow chief, so they admitted him to the nation.

Through the 1830s, Beckwourth lived with a Crow band. He rose in their society from warrior to chief (a respected man) and leader of the “Dog Clan”. According to his book, he eventually ascended to the highest-ranking war chief of the Crow Nation. He still trapped but did not sell his or Crow furs to his former partners of the Rocky Mountain Fur Company. Instead, he sold to John Jacob Astor’s competing American Fur Company. Beckwourth participated in raids by the Crow on neighboring nations and the occasional white party. Sometimes such raids escalated to warfare, most often against bands of their traditional Blackfoot enemy.

Many rumors persist about his time there – with some claiming that his stay with the trade was advanced and supported by the RMFC and most saying that Beckwourth married the daughter of a tribal chief and may have had other wives and several children.

When the American Fur Company did not renew his contract, Beckwourth returned to St. Louis. He volunteered with the United States Army to fight in the Second Seminole War in Florida. Accounts differ as to his role in the war – maybe he was a wagon master, maybe a courier and maybe a foot soldier.

From 1838 to 1840, he was working along in the Kansas & Nebraska Territories – at various posts in Fort Vasquex near Plattville, Fort Bent on the Arkansas River, and at Pueblo.

By 1844, he was running trading missions along the Old Spanish Trail from the Arkansas River all the way to Alta California. When the Mexican War broke out, he reenlisted and served as courier. His most important work was leading the suppression of the Taos Revolt in the Mexican Territory.

By 1848, Beckwourth was on the move again – opening a store in Sonoma, but then working as a card player in Sacramento (easy money with all the boomtown gold and drunken miners who can’t count cards).

He spent the early 50s in northern California blazing trails from the Truckee River & Pyramid Lake (Utah Territory) back to Marysville. The trail spared the settlers and gold seekers, about 150 miles (240 km) and several steep grades and dangerous passes, such as Donner Pass. By his account, the business communities of the gold towns in California were supposed to fund the making of the trail. However, when Beckwourth tried to collect his payment in 1851 after leading a party through, Marysville had suffered from two huge fires and town leaders were unable to pay.

Beckwourth began ranching in the Sierra. His ranch, trading post and hotel, in today’s Sierra Valley, were the starting of the settlement of Beckwourth, California.

In the winter of 1854/55, the itinerant judge, Thomas D. Bonner stayed in the hotel, and on winter nights Beckwourth told him his life story. Bonner wrote it down, edited the material the following year, and offered the book to Harper & Brothers in New York. The Life and Adventures of James P. Beckwourth was published in 1856.

The book is considered by many to be well maybe not exactly the way things actually happened. But more a good tale than an actual accounting of facts like you would read in an Eastern newspaper. That ain’t always the point though, as this story illustrates.

An often-told story has it that when the book appeared, a group of miners who were well-acquainted with Beckwourth commissioned one of its members to pick up a copy while on a trip to San Francisco. But the man, being careless, got a copy of the Bible instead. In the evening, he was requested to read aloud from the long-awaited book, and opening it at random, he hit upon and read the story of Samson and the foxes.

“That’ll do!” one of the men cried. “I’d know that story for one of Jim’s lies anywhere!” 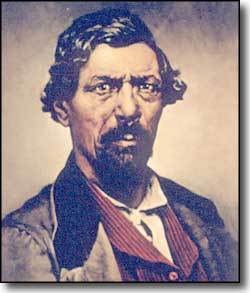