John “Grizzly” Adams (b.1812) is a famous California mountain man and trainer of grizzly bears and other wild animals captured for menageries, zoological gardens and circuses.

Born and raised in Medway, Massachusetts, Adams started as an apprentice cobbler at the age of fourteen. At twenty-one he left his job and went to the outdoors, signing onto a group of showmen as an animal collector and trainer.

He spent the next several years hunting and capturing animals in the wilds of New England.

In 1849 he left for the gold rush, investing his life savings to buy a supply of footwear. He lost his entire investment in the St Louis wharf fire, and arrived in the west destitute. He tried his luck at mining, hunting, trading, ranching and farming. Like many he went from wildly rich to broke overnight several times.

In 1852 after losing his ranch in Stockton, he went into the Sierra Nevada to get away from it all. He made friends with the Miwok, built a cabin and lived alone over the winter.

In the spring, he traveled extensively in North California and the Washington Territory. While there he meet a bear named Lady Washington. Though two years old, he managed to “tame” and train her, and now rides her in circus shows. In 1854, he rescued two cubs – keeping one of them and naming him Benjamin Franklin – now his constant companion.

In 1856, John retrieved all his animals and opened the Mountaineer Museum in San Francisco. The next year he opened an even larger museum called the Pacific Museum. Day-to-day operations are run by John’s friend and business partner, T.H. Hittell. John still likes to spend his time in the mountains – needing the time alone, and looking for more and better specimens for his show. 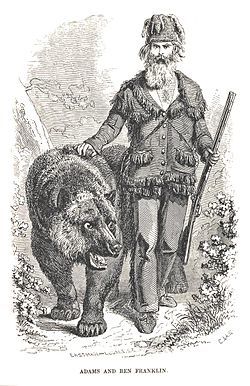