Governor Denver’s petition to create a new Colona Territory was defeated during the 1859 mini-game. Jane’s strident opposition to the expansion of slavery caused Denver to take a dislike to her.

James William “Jim” Denver (b. October 23, 1817) was an American politician, soldier and lawyer. He served in the California state government, as an officer in the United States Army, and as a Democratic member of the United States House of Representatives from California. He served as secretary and Governor of the Kansas Territory. The town of Denver, Kansas Territory (nee Colona), is named after him.

James W. Denver was born near Winchester, Virginia. He attended public schools and moved to Ohio with his parents in 1830, settling near Wilmington. In 1841 he taught school in Missouri, and in 1844 he graduated from the law school of the University of Cincinnati. He was admitted to the bar and practiced law near Xenia, Ohio. He moved to Platte City, Missouri, in 1845, where he continued his law practice and acting career.

In 1847, during the Mexican-American War, he recruited a company for the 12th U.S. Volunteer Infantry and was commissioned a captain, serving under General Winfield Scott.

After the war in 1850, Denver traveled to California, where he became a trader. Denver killed newspaper editor Edward Gilbert in a duel on August 2, 1852. Later that same year, he was elected to the California State Senate. He was later appointed as Secretary of State of California. In 1854 he was elected to the United States Congress as representative from California, serving from March 4, 1855 – March 3, 1857. He was not a candidate for renomination in 1856.

On June 17, 1857, Denver was appointed by Buchanan as Secretary of the Kansas Territory. In December 1857 he was appointed as Territorial Governor. On the day that Denver assumed the territorial governorship, citizens in the territory voted on the Lecompton Constitution, which opened the territory to slavery. The vote offered a choice only between full slavery and limited slavery in the territory and was thus largely boycotted by Free-Staters who were in favor of abolishing slavery. The pro-slavery constitution passed by an overwhelming margin. Later it was discovered that several thousand votes were cast fraudulently by “border ruffians” who had crossed into the territory from Missouri in order to cast pro-slavery ballots (The vote was overturned by a subsequent election in August 1858, and Kansas was later admitted to the Union, in 1861, as a free state. See Bleeding Kansas for details.).

In November 1858, while Denver was still serving as territorial governor, William Larimer, Jr., a land speculator from Leavenworth, planted the townsite of “Denver City” along the South Platte River in Arapaho County in western Kansas Territory (the present-day state of Colorado). Larimer chose the name “Denver” to honor the current territorial governor with the intention that the city would be chosen as the county seat of Arapaho County. It was actually William McGaa and William Larimer who got the settlement of St. Charles at the confluence of Cherry Creek and the South Platte River to change its name to Denver in hope of becoming the county seat.

Denver retired as territorial governor after the failed attempt to create a separate territory of Colona. He was reappointed by Buchanan to his previous post of Commissioner of Indian Affairs for Kansas & Nebraska. 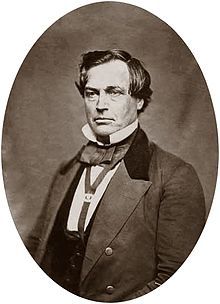