Discoverer of gold at Sutter's Mill

James Wilson Marshall (b.October 8, 1810) is an American carpenter and sawmill operator, who reported the finding of gold at Coloma on the American River in California on January 24, 1848, the impetus for the California Gold Rush. The mill property was owned by Johan (John) Sutter who employed Marshall to build his mill. The wave of gold seekers turned everyone’s attention away from the mill which eventually fell into disrepair and was never used as intended. Neither Marshall or Sutter ever profited from the gold find.

After spending time in Indiana and Illinois, he settled in Missouri (in an area created by the Platte Purchase) in 1844, and began farming along the Missouri River. It was there that he contracted malaria, and left Missouri in the hopes of improving his health. He joined an emigrant train heading west and arrived in Oregon’s Willamette Valley in the spring of 1845. He left Oregon in June 1845 and headed south along the Siskiyou Trail into California, eventually reaching Sutter’s Fort, California in mid-July.

John Sutter hired Marshall to assist with work at the sawmill and around the fort (carpentry, primarily). He also helped Marshall to buy two leagues of land on the north side of Butte Creek (a tributary of the Sacramento River) and provided him with cattle. It was here that Marshall began his second stint as a farmer.

During the Mexican-American War, Marshall volunteered and served under Captain John C. Frémont’s California Battalion during the Bear Flag Revolt. When he left the battalion and returned to his ranch in early 1847, he found that all his cattle had either strayed or been stolen. With his sole source of income gone, Marshall lost his land.

The Discovery of Gold

Marshall soon entered into a partnership with Sutter for the construction of a sawmill. Marshall was to oversee the construction and operation of the mill, and would in return receive a portion of the lumber. After scouting nearby areas for a suitable location, he eventually decided upon Coloma, located roughly 40 miles upstream of Sutter’s Fort on the American River. He proposed his plan to Sutter, and construction began in late August. His crew consisted mainly of local Native Americans and veterans of the Mormon Battalion on their way to Salt Lake City, Utah.

Construction continued into January 1848, when it was discovered that the tailrace portion of the mill (the ditch that drained water away from the waterwheel) was too narrow and shallow for the volume of water needed to operate the saw. Marshall decided to use the natural force of the river to excavate and enlarge the tailrace. This could only be done at night, so as not to endanger the lives of the men working on the mill during the day. Every morning Marshall examined the results of the previous night’s excavation.

On the morning of January 24, 1848 Marshall was examining the channel below the mill when he noticed some shiny flecks in the channel bed.

The metal was confirmed to be gold after members of Marshall’s crew performed tests on the metal—boiling it in a lye solution and hammering it to test its malleability. Marshall shared his discovery with Sutter, who performed further tests on the gold and told Marshall that it was “of the finest quality, of at least 23 karat.”

The immediate impact for Marshall was negative. His sawmill failed when all the able-bodied men in the area abandoned everything to search for gold. Before long, arriving hordes of prospectors forced him off his land. Marshall soon left the area. 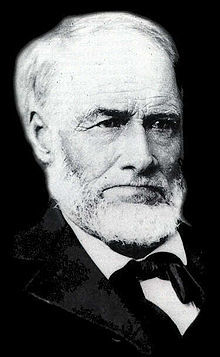