Early prospector and Youngest member of the Lewis & Clark Expedition

Jean-Baptiste is a passenger on the SVR during Chapter 4. During the ride, he is overheard by Garrett & Jost speaking his concerns about whether Judah is attempting to “rob” him. He is impressed with Jess’s shooting skill during the train robbery and asks her to visit next time she is in Auburn as he “sometimes has other types of business interests that need tending to”.

Jean Baptiste Charbonneau (b. February 11, 1805) is an explorer, guide, fur trapper trader, military scout, alcalde, gold prospector and hotel operator. He speaks English, French and Shoshone with native fluency – and can speak German and Spanish and other western Indian languages.

Jean Baptiste is the son of Sacagawea, a Shoshone, and her Métis French Canadian husband Toussaint Charbonneau, who worked as a trapper and interpreter for the Lewis and Clark Expedition. He was born at Fort Mandan in North Dakota. He was taken by his parents as an infant across the country. The Expedition co-leader William Clark nicknamed the boy Pomp. He lived with Clark in St. Louis, Missouri as a boy, where he attended St. Louis Academy. Clark paid for his education. Sacagawea and Toussaint Charbonneau also had a second child, a daughter named Lizette Charbonneau who died in childhood.

He traveled extensively throughout the west in the 1830s and 1840s, working mostly for the American Fur Company and Rocky Mountain Fur Company as a trapper what is now Missouri, Kansas and the Nebraska Territories. He also served as guide for John Fremont.

He became a guide for Col Philip Cooke during the Mexican War leading supply trains from Santa Fe to the western coast at San Diego. Although this trail is known as “Cooke’s Trail” or the “Gila Trail” – many believe that Charbonneau is the real explorer responsible for establishing this important path through the Mexican Territory.

Following the war, he accepted a post as alcalde of Mission San Luis Rey de Francia (just north of San Diego). Disagreements with the policies of the territorial governor (Col Richard Barnes Mason) lead to increasing friction and Charbonneau’s resignation in August 1848. [California statehood and Mason’s death in 1850 have effectively resolved any lingering difficulties with this period]

Jean Baptise moved north to Placer County and became one of the first prospectors on the American River. Following a difficult winter and strong spring runoff, he opened a claim with Jim Beckworth in June 1849 at what is now called Big Crevice.

This claim and others have lead to a comfortable life in Placer County. He operates claims at Secret Ravine, the site of several mining operations along Dry Creek just before it hits the North Fork of the American River, and has business interests in Auburn proper including a hotel. 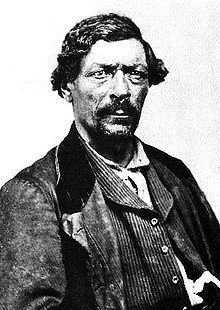