Equipment of note that wasn’t accounted for above: Excellent Horse

I was born Jessica Theresa Connor, in St. Louis in 1836. My father Arnold was a lawyer, well to do but not amazingly so. Ruled the house with an iron fist. My mother Deirdre was what women are trained to be: homemaker, mom, support apparatus, and charming hostess. I was supposed to be trained for that too, but the training never really took. I do have a full 10th grade education, although maybe I could have paid a bit more attention. My destiny was to become a faceless nobody, but I broke with that plan when I was 16. My father was angling for me to marry and old, stodgy banker but I had my eyes on Reginald Jackson who was younger, better looking, and a lot more fun. He also had no career prospects to speak of, but I wasn’t too concerned about that. Dad and I had a disagreement about who I should marry that ended in an ultimatum — marry the banker or you are no longer part of this family. I don’t much like ultimatums, so Reggie and I got married and we left St. Louis.

The end of life as I knew it. A new beginning and a new name, Jessie Jackson. Reggie and I moved west to make our fortune via the California Trail. Reggie mostly liked to gamble and party, and usually won enough money to keep us all fed and clothed. A lot of people don’t like losing, though, so we tended to move around a bit mostly in central and northern California. I had a daughter, Abigail, the light of my life. Reggie spent a lot more time out partying with his friends than coming home, but he stayed with us. Reggie got this hot tip about a mining claim near the south fork of Clear Creak (west of Redding), which wasn’t the first hot tip he ever got but proved to be a good one for a change. It looked like we were going to make it when Reggie took in a sample to the assay office and confirmed that we’d found gold, but then everything turned upside down. A few days later some random drunk thugs came by the mining site. They shot Reggie and Abigail while I was away gathering wood. I let them keep on drinking then shot them when they were too drunk to put up much of a fight. Then I cried for three days, cleaned up the mess, and left.

The end of life as I knew it. A new beginning and a new name, JT Connor. I had some gold left over from the mine, but mostly I made my way by hunting and trapping in central California. As little contact with people as possible, just enough to sell and resupply. Then back in the wilderness to keep my own dark council. I did that for about a year, and eventually realized that it was about time to get on with my life.

The end of life as I knew it. A new beginning and a new name, hopefully my last. Jess Connor, here in Nevada City to seek her fortune and her place in life. 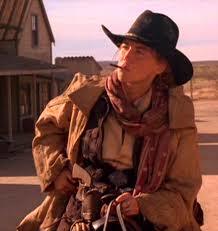