The "Sutter" of Sutter's Mill

Johann Augustus Sutter (b.February 15, 1803) is a Swiss pioneer of California known for his association with the California Gold Rush by the discovery of gold by James W. Marshall and the mill making team at Sutter’s Mill, and for establishing Sutter’s Fort

Johann went to school in Neuchâtel, Switzerland and later joined the Swiss army, eventually becoming captain of the artillery. At age 23, Johann married Annette Dübold, the daughter of a rich widow. He operated a store but he was more interested in spending money than making it. Because of family and mounting debts, Johann faced charges that would have him placed in jail. So he decided to dodge trial and ventured to America; he styled his name to Captain John Augustus Sutter.

In North America, Sutter undertook extensive travels. Before he went to the U.S., he had learned Spanish and English in addition to Swiss French. Together with 35 Germans he moved from the St. Louis area to Santa Fe, New Mexico Territory, then moved to the town of Westport, Oregon Territory. On April 1, 1838, he joined a group of missionaries, led by the fur trapper Andrew Drips, and traveled the Oregon Trail to Fort Vancouver in Oregon Territory, which they reached in October. He next traveled to the Kingdom of Hawaii where he stayed for four months. Then visited New Archangel (now known as Sitka), the capital of the Russian-American Company colonies in Russian America.

Finally he sailed for Alta California, reaching Yerba Buena on July 1, 1839 (now San Francisco), which at that time was only a small seaport town.

At the time of Sutter’s arrival in California, Alta California was a province of Mexico, and had a population of only about 1,000 Europeans and an estimated 100,000-700,000 Native Americans. Sutter had to go to the capital at Monterey to obtain permission from the governor, Juan Bautista Alvarado, to settle in the territory. Alvarado saw Sutter’s plan of establishing a colony in Central Valley as useful in “buttressing the frontier which he was trying to maintain against Indians, Russians, Americans and British.”

Construction on a fortified settlement was began in August 1839, which Sutter named New Helvetia, or “New Switzerland,” after his homeland, “Helvetia” being the Latin name for Switzerland. Sutter often began to identify himself as ‘Captain Sutter of the Swiss Guard’. Completed in 1841, on 18 June, he received title to 48,827 acres on the Sacramento River.

A Francophile, Sutter threatened to raise the French flag over California and place New Helvetia under French protection, but in 1846 California was occupied by the United States in the Mexican-American War. Sutter at first supported the establishment of an independent California Republic but when United States troops under John C. Fremont briefly seized control of his fort, Sutter did not resist because he was outnumbered.

Beginning of the Gold Rush

In 1848, gold was discovered in the area. Initially, one of Sutter’s most trusted employees, James W. Marshall, found gold at Sutter’s Mill. It started when Marshall and Sutter began the construction of his sawmill in Coloma, along the American River. One morning, as Marshall inspected the tailrace for silt and debris, he noticed some gold nuggets and brought them to Sutter’s attention. Together, they read an encyclopedia entry on gold and performed primitive tests to confirm whether it was precious metal. Sutter concluded that it was, in fact, gold, but he was very anxious that the discovery not disrupt his plans for construction and farming. At the same time, he set about gaining legitimate title to as much land near the discovery as possible.

Sutter’s attempt at keeping the gold discovery quiet failed when merchant and newspaper publisher Samuel Brannan returned from Sutter’s Mill to San Francisco with gold he had acquired there and began publicizing the find. Large crowds of people overran the land and destroyed nearly everything Sutter had worked for. To avoid losing everything, Sutter deeded his remaining land to his son, John Augustus Sutter, Jr. The younger Sutter, who had come from Switzerland and joined his father in September 1848, saw the commercial possibilities of the land and promptly started plans for building a new town he named Sacramento, after the Sacramento River. The elder Sutter deeply resented this; he had wanted the town named Sutterville (for them) and for it to be built near New Helvetia.

Sutter gave up New Helvetia to pay the last of his debts. He rejoined his family and lived in Hock Farm (in California along the Feather River). 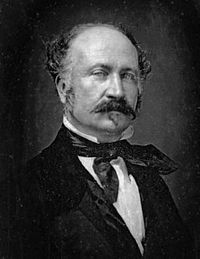