Frémont is controversial, impetuous, and contradictory. Some folks regard him as a military hero of significant accomplishment, while others view him as a failure who repeatedly defeats his own best purposes. The keys to Frémont’s character and personality may lie in his being born illegitimately, his ambitious drive for success, self-justification, and passive-aggressive behavior.
View Character Sheet

John Charles Frémont or Fremont (born January 21, 1813) is an American military officer, explorer, and politician who became the first candidate of the anti-slavery Republican Party for the office of President of the United States.

During the 1840s, when he led four expeditions into the American West, that era’s penny press and admiring historians accorded Frémont the sobriquet The Pathfinder.

During the Mexican American War, Frémont, a major in the U.S. Army, took control of California from the Bear Flag Republic in 1846. Frémont then served as military Governor of California; however, he was court-martialed for mutiny and insubordination.

After President Polk commuted his sentence, Frémont led a fourth expedition, which cost ten lives, seeking a rail route over the mountains around the 38th parallel in the winter of 1849. He retired from military service and settled in California.

Frémont became one of the first two U.S. senators elected from the new state of California in 1850. He was the first presidential candidate of the new Republican Party, carrying most of the North. He lost the 1856 presidential election to Democrat James Buchanan when Know-Nothings split the vote and Democrats warned his election would lead to civil war. 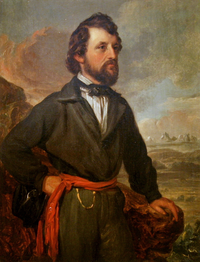