Bounty hunter of the Gold Country

A dangerous-looking man with a mysterious past and an obvious nom de plume.

He features as a minor character and mysterious, unresolved plot point in Chapter 3 where he meets Nurse Jane and Samuel Davis.

Smith meets Jess Connor during while working on the PSL. His warning to Samuel Davis becomes the initial introduction to Chapter 4

NOTE: Love’s hunt for Murrieta was romanticized and became the basis for the legend of Zorro.

Love was born in Vermont and left home at an early age to become a sailor, reputedly captaining a ship by the age of 15. He worked in a number of jobs around the country, then joined the army as a volunteer to fight in the Mexican American War, where he gained fame as a courier along the Rio Grande and the Texas border.

With the California Gold Rush in 1850 Love came to California to seek his fortune but was unsuccessful. Instead, he worked as a bounty hunter, capturing Pedro Gonzalez, a member of Murrieta’s gang who had been accused of murder, in June 1852. With his reputation from the war and this success under his belt, Love was named as the commander of the California State Rangers. The unit was created on May 11, 1853 by Governor John Bigler specifically to capture or kill the “Five Joaquins” gang, who had been identified as being responsible for over 20 murders in California’s Gold Country.

On July 25, 1853, a unit of these Rangers encountered a group of men near Panoche Pass in San Benito County, about 100 miles (160 km) away from the Mother Lode and 50 miles (80 km) away from Monterey. A confrontation occurred and two of the men were killed. It was claimed that one of the dead men was Murrieta and the other Manuel Garcia (known as “Three-Fingered Jack”), Murrieta’s right-hand man. The Rangers cut off the heads of both men as well as Garcia’s hand as proof. Murrieta’s head and the hand were preserved in brandy, but Garcia’s head was not and it decayed, forcing them to bury it at Fort Miller, near Millerton.

The jars were displayed in Mariposa, Stockton and San Francisco and traveled throughout California, where spectators could, for $1, see the remains. Seventeen people, including a priest, signed affidavits identifying the remains as Murrieta’s and Love and his Rangers received the reward money. However, a young woman claiming to be Murrieta’s sister said she did not recognize the head and argued that it could not be his since it did not have a characteristic scar on it. Additionally, numerous sightings of Murrieta were reported after his reported death. Many people criticized Love for showing the remains in large cities far from the mining camps, where Joaquin might have been recognized. It has even been claimed that Love and his Rangers killed some innocent men and made up the story of the capture of Murrieta to claim the reward money. Doubts about Murrieta’s capture followed Love for the rest of his life.

Having accomplished its mission, the California Rangers was disbanded and Love purchased a large tract of land near Boulder Creek in Santa Cruz County. Misfortune followed him, and by the end of 1854 fires, floods and squatters destroyed his property – Love also had a difficult relationship with the widow Mary Bennett.

Looking for a break, Love has returned to things he is good at – working once again as a bounty hunter and Army scout. 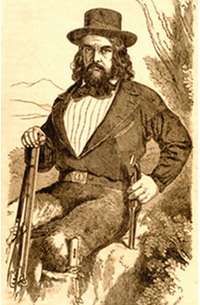