Jonathan R. Davis (b. 1816) was born in Monticello, South Carolina in 1816. He grew up there and graduated from South Carolina College (now Univ South Carolina) where he was a member of the prestigious Euphradian Society (combination honors club and social/drinking club, precursor to modern-day fraternities).

He joined the army at the start of the Mexican War – serving as lieutenant (later braveted to captain) in the Palmetto Regiment Volunteers. He was wounded at the Battle of Churubusco in August 1847 along with thirteen other officers (five died).

This fight left the army only 5 miles from Mexico City. Afterwards Gen Scott made one of his most controversial decisions to temporarily halt fighting (wanting not to completely humiliate the Mexicans by destroying their capital, and giving Santa Anna the chance to negotiate a surrender).

Following the war and the occupation, Davis (like many others) headed west to California where he worked mainly as a prospector along the American River for several years.

On December 19, 1854, while trekking on a miner’s trail in along the North Fork of the American River, Dr. Bolivar Sparks, James McDonald, and Captain Jonathan Davis were bushwhacked by an international band of bandits. The bandits, a Frenchman, two Americans, two Britons, four Mexicans, and four Australians, had robbed and killed four American miners on the previous day and six Chinese miners on the day before that. Several of the bandits were members of the Sydney Ducks gang.

McDonald was killed instantly and Dr. Sparks was fatally wounded; Davis pulled out both of his pistols and killed seven of the bandits in short order. Out of bullets, Captain Davis, an expert fencer, pulled out his Bowie knife and killed four more of his attackers. The surviving bandits fled for their lives. The shootout was witnessed by a group of miners, who buried the bodies of the dead.

Davis continues to live in the Gold Country (mostly in Placer County) pursuing various mining claims and business pursuits. He is a bit of a local celebrity – and he tells his stories well enough to get a drink at most saloons, especially those with miners from the Carolinas. 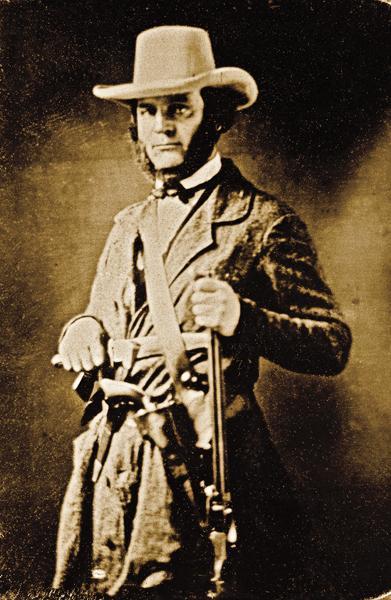