Levi Strauss was born in Buttenheim, Germany, on February 26, 1829, in the Franconian region of Bavaria, Germany, to an Ashkenazi Jewish family. He was the son of Hirsch Strauss and his second wife Rebecca Strauss. At the age of 18, Strauss, his mother and two sisters traveled to the United States to join his brothers Jonas and Louis, who had begun a wholesale dry goods business in New York City called J. Strauss Brother & Co.

Levi’s sister and her husband David Stern moved to St. Louis, Missouri, while Levi went to live in Louisville, Kentucky, and sold his brothers’ supplies in Kentucky. In January 1853, Levi Strauss became an American citizen

The family decided to open a West Coast branch of the family dry goods business in San Francisco, which was the commercial hub of the California Gold Rush. Levi was chosen to represent the family and he took a steamship for San Francisco, arriving in early March 1853, where he joined his sister Fanny’’s family. 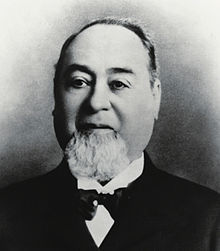