In December 1818, Ensign Edward Gilbert met Eliza Oliver when he arrived with the 25th Regiment. They were married on 29 April 1820, and Lola was born the following February. The young family made their residence at County Roscommon, until early 1823, when they journeyed to Liverpool, thence departing for India.

Lola’s father died of cholera shortly after their arrival in India, and her mother quickly remarried another officer. Lola’s spoiled nature and wild ways lead to her being returned to Great Britian, where she bounced around for the next six years – living with distant relatives and at boarding schools.

In 1837, 16-year-old Eliza eloped with Lieutenant Thomas James, and they married. The couple separated five years later, in Calcutta, and she became a professional dancer under a stage name. She had her London debut as “Lola Montez, the Spanish dancer” in June 1843, but she had been recognized as “Mrs. James”. The resulting notoriety hampered her career in England and she departed for the Continent. By this time, she was almost certainly accepting favours from a few wealthy men, and was regarded by many as a courtesan.

Life as a courtesan

In the early 1840s, Lola is working on the Parisian stage and has an affair with Franz Liszt. He introduced her into the Bohemian circles of such fashionable personalities as Alexandre Dumas and Amantine Dupin (known by her pseudonym “George Sand”). After a misunderstanding involving a duel, Lola decides it was best to leave Paris and heads to Bavaria.

In 1846, she arrived in Munich, where she was discovered by and became the mistress of, Ludwig I of Bavaria. The rumour was, at the time they met, Ludwig had asked her in public if her bosom was real, to which her response was to tear off enough of her garments to prove that it was. She soon began to use her influence on the King and this, coupled with her arrogant manner and outbursts of temper, made her unpopular with the local population. Despite the opposition, Ludwig made her Countess of Landsfeld on his next birthday, 25 August 1847. Along with her title, he granted her a large annuity.

For more than a year, she exercised great political power, which she directed in favor of liberalism, against the conservatives and the Jesuits. Her influence became so great that the ultramontane administration of Karl von Abel was dismissed because that minister objected to her being made Countess Landsfeld. The students of the university were divided in their sympathies, and conflicts arose shortly before the outbreak of the revolutions of 1848, which led the King, at Lola’s instigation, to close the university. In March 1848, under pressure from a growing revolutionary movement, the university was re-opened, Ludwig abdicated, and Montez fled Bavaria, her career as a power behind the throne at an end.

From 1851 to 1853, she performed as a dancer and actress in the eastern United States, one of her offerings being a play called Lola Montez in Bavaria. In May 1853, she arrived at San Francisco. Her performances there created a sensation, but soon inspired a popular satire, Who’s Got the Countess?.

She married Patrick Hull, a local newspaperman, in July and moved to Grass Valley, California, in August. This marriage soon failed; a doctor named as corespondent in the divorce suit brought against her was shortly after murdered. Montez remained in Grass Valley at her little house for nearly two years. Montez served as an inspiration to another aspiring young entertainer, Lotta Crabtree. Lotta’s parents ran a boarding house in Grass Valley, and Lotta soon attracted the attention of her neighbor Montez, who encouraged Lotta’s enthusiasm for performance.

In May 1856, she left Sydney to return to San Francisco. She suffered tragedy when her manager fell overboard under somewhat suspicious circumstances. Since her return she has struggled to arrange a comeback. 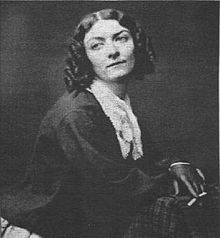