During Chapter 7 the players had the opportunity to attend a party at the Montgomery Block hosted by Mrs. Halleck in honor of Lola Montez. Garrett Matthews woke up in Lotta’s apartment the next morning. Unfortunately memories are a bit hazy – so is this a love interest, or something else ??

IRL: Lotta was born in 1847. She has been aged to make her more of a characters in RESOLUTE.

Lotta Crabtree (b. November 7, 1842) is an American actress, entertainer and comedian. She is the daughter of John & Mary Ann Crabree

Her father, John Ashworth Crabtree, a book seller, left for San Francisco in 1851 to join those seeking fortune in the California Gold Rush. Lotta and her mother, Mary Ann (née Livesey) Crabtree, followed two years later, joining John in the boomtown of Grass Valley. While in Grass Valley, the Crabtrees ran a boarding house. Lotta soon attracted the attention of a neighbor, the dancer and actress Lola Montez, who encouraged Lotta’s enthusiasm for the performance.

The Crabtrees moved again and set up another boarding house, this time in Rabbit Creek, forty miles north of Grass Valley. Soon after, Lotta made her first professional appearance at a tavern owned by Matt Taylor. She began touring throughout California, and Nevada, making a name for herself as a dancer, singer, and banjo player in the mining camps.

In 1856, the family moved back to San Francisco. By the fall of 1858 she became “Miss Lotta, the San Francisco Favorite”. Lotta’s mother serves as her manager and collects all of Lotta’s earnings in gold, carrying it in a large leather bag. 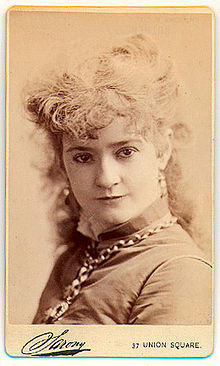