Owner of "Wilson's Hotel" in Vacaville

Luzena Stanley Hunt (b.1819) was the third of nine children born to a Quaker family living in North Carolina. The family had moved to Andrew County, Missouri by 1843, and in 1844 Luzena married Mason Wilson there.

Gold fever spread in the American West during 1849. When Luzena’s husband made up his mind to go west, she stated that where he went, so too could she and her two small children. At the time of the California Gold Rush, the West was unsettled territory deemed unsafe for women. A wife usually stayed behind and managed the home while the man tried his luck at striking it rich.

Once in Sacramento, Luzena quickly learned the value of being a female minority in a male-dominated group. A hungry miner amazed at the presence of a female in the camp approached Luzena while she was cooking dinner for her family. He offered her five dollars for her biscuits. Luzena said she thought it sounded like a fortune and hesitated to respond. The miner mistook her hesitation as reluctance and upped the offer to ten dollars, which she gladly accepted.

After a few days in Sacramento, the Wilsons sold their oxen to purchase a stake in a hotel. The hotel, Luzena remarked, consisted of two rooms, the kitchen, which was her special province, and a living room. During the six-month stay in Sacramento, Luzena saw only two other women. Therefore, she was able to gain a lot of business from the men who desired a meal cooked by a woman.

Around Christmas time 1850, the levees broke in Sacramento and the floodwater damaged the Wilson’s property and their small fortune of barley. Terrified of the long duration of winter with no money, and frightened of flooding disaster to strike again, Luzena learned of miners who were striking it rich in Nevada City. Broke and desperate to start anew, Luzena found a man with an idle team who said he would take her, her two children, a stove, and two sacks of flour to Nevada City for seven hundred dollars. Luzena stated, if she survived the journey and made money he would be paid.

Upon arrival in Nevada City Luzena saw a sign for the Wamac Hotel and remarked, that her being a woman made her decide to take in boarders as a source of income. With her new determination to set up a rival hotel, she chopped her wood and drove her stakes into the ground. By the time her husband came back that evening she already had twenty men eating at her table in the El Dorado hotel. In six weeks Luzena had made the money to pay back the teamster.

The El Dorado Hotel burned to the ground eighteen months later during the 1853 fire. The Wilsons decided to journey back towards Sacramento. However, having found it much changed, they lingered for a few months and decided to venture on to the valley.

The family moved toward the coast and settled beneath an oak tree in a little valley called Vaca, named after the property’s Californio owner. Luzena etched “Wilson’s Hotel” on a board and made chairs from stumps. Guests slept behind a hay bale. Mason Wilson farmed and the family prospered. As time went on, the area became more populated. Luzena and Mason Wilson have benefited from their hotel, restaurant and boarding business to become substantial landowners in the town of Vacaville. 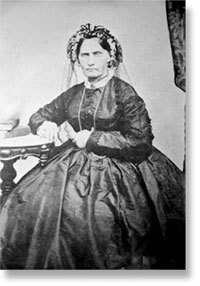