Nancy Kelsey (B. August 1, 1823, Barren County, Kentucky) was a member of the Bartleson-Bidwell party. She was the first white woman to travel overland from Missouri, seeing Utah and Nevada before crossing the Sierra Nevada mountains into California on November 25, 1841. Wife of Benjamin Kelsey, and the mother of eight surviving children, she is sometimes referred to as the “Betsy Ross of California” for her role in creation of the original Bear Flag from which Bear Flag Rebellion got its name.

Nancy married Benjamin “Ben” Kelsey on October 25, 1838 in Henry County, Missouri. Her husband and his brothers, David, Samuel and Andrew had settled a section in the Hoffman Bend area of what would become St. Clair County, Missouri and had already been in some trouble with the authorities. There were some shady dealings in real estate; Samuel was indicted for murder, and a lawsuit was filed against Andrew in 1841. After his brothers left for the west, David remained behind as David Kelso in Missouri, taking care of their elderly father, Samuel Kelsey Sr.

Nancy Kelsey was 17 years old in 1841 when Ben decided to travel west after reading doctor John Marsh’s letter describing his trip by sea through the Strait of Magellan to the San Joaquin Valley of California.

Before they left Missouri, her second child, named after his uncle Samuel, died after only eight days. Shortly thereafter on May 18, 1841, Ben and Nancy with their one-year-old daughter, Martha Ann, and Kelsey’s brothers joined John Bidwell as members of the first wagon train to California.

One emigrant group, including some Kelseys as well as Nancy’s sister and new husband, went directly to Oregon. The other group – including Nancy, Martha Ann and Ben Kelsey – took the route detailed in Marsh’s letter, which Marsh had never seen, through Utah and Nevada.

Many years later, an interview with Nancy Kelsey was published in the San Francisco Examiner where she recollected the trip across the continent; she said the group had no guide and no compass. She is credited with being the first white woman to see the Utah Territory, the Great Salt Lake, the first to cross the Sierra Nevada and the first to travel overland from Missouri to California.

During the Bear Flag Rebellion in 1846, while the Kelsey brothers joined John C. Fremont in declaring California’s independence from Mexico, Nancy Kelsey, Mrs. John Sears, and Mrs. Benjamin Dewell sewed the original “Bear Flag” from a pattern drawn by William L. Todd. The words “California Republic” were inked in pokeberry juice, the fabrics borrowed from the little available and many said the bear looked more like a pig but it only had to serve for twenty-four days from June 14, 1846 until the U.S. Navy claimed California for the U.S. and raised an American flag at Monterey.

On June 28, 1846, Fremont and Ben Kelsey became enemies when Kelsey refused to kill José de los Reyes Berreyesa, a Mexican neighbor and the twin sons of Francisco de Haro; they were killed by Kit Carson.

In late 1848, Ben left Nancy and the four children behind when he took fifty Pomo men from his brother Andrew’s ranch and established a mining camp called Kelsey Diggings in the Sierra foothills near Sutter’s Mill – becoming one of the first groups of gold miners. Once at the diggings, Ben sold all the company’s supplies to other miners and returned home to Sonoma, ill with malaria, but with a $16,000 profit.

Andrew Kelsey and another partner, surnamed Stone, had forced the wife of one of their workers into concubinage and sent her husband off to live with Nancy and Ben Kelsey. When the mistreated husband returned to his people, he was tortured. Shortly thereafter, Stone and Andrew Kelsey were killed, but the details are highly variable among sources. This event provoked the Bloody Island Massacre, although the 60-100 Pomo Indians who were killed on Bloody Island by the U.S. Army and volunteers were not the ones responsible for the deaths of Stone and Kelsey.

Seeking revenge, Ben Kelsey and a group of vigilantes called “The Sonoma Gang” murdered “dozens of innocent Native Americans in Napa and Sonoma counties” in retribution for Andrew’s murder. Seven of the vigilantes – but not Ben Kelsey – were captured and charged with murder, but bailed for $10,000 in the first-ever decision by the Supreme Court of California. Abandoning their bail, at least three of the seven sailed for Humboldt Bay aboard the schooner Ryerson.

Nancy delivered Nancy Rose on February 14, 1851 in Sonoma at about the same time as Ben Kelsey became sick with tuberculosis. They lost their fancy house in Arcata to foreclosure after which Ben, Nancy and four children moved around a lot through Sacramento and San Joaquin to Mariposa for two months, then lived for eight months in San Jose.

The family lived in Oakland in 1855, moved to Gilroy for fourteen months, and moved again to the Kern River mines where Kelsey mined and operated a toll bridge for 18 months. From there, the family moved to Visalia (southern San Joaquin valley) – and is rumored to be talking about going further south to Mexico. 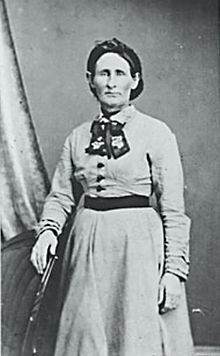