Niles Searls (born December 22, 1825) is an attorney, politician, and judge for the 14th district of California.

McFarland appears “off-camera” as the judge who handles the fallout from the Vedder shooting. He generally believes the PCs told the truth and nothing but the truth – but is not so sure they told the whole truth.

Searls, whose last name is also sometimes spelled as Searles, was born in Coeymans, New York. His father, Abraham Searls (born 1802), of English descent, worked as a farmer. His mother, Lydia Niles, was of Scottish descent.

When the family moved to Prince Edward, Ontario, Canada, Searls attended school in Wellington for five years before returning to New York to study at Rensselaerville Academy for the next three years. From here, he spent a year in the law office of O.H. Chittenden, preparing himself for the practice of law before attending John W. Fowler’s newly established State and National Law School with fellow students Chancellor Hartson and Tim N. Machin. He was admitted to the New York bar May 2, 1848.

“Heavy rains, – The wagons were often imbedded in the loose murky earth to their hubs. Tongues were broken, harness torn, mules lames, and to all appearances, we were nearly shipwrecked. After three hours of hard swearing, we reached the high ground and encamped for the night.” (Excerpt from Searls’ diary, May 19, 1849)

Searls travelled to Kentucky and Illinois before settling for a short time in Missouri to practice law. When he decided to join the California Gold Rush, he chose the wagon train company endorsed by the Daily Missouri Republican, the Pioneer Line. He traveled with his friend from law school, Charles Mulford. Arriving in California in October 1849, they mined and traded.

In 1850, he settled in the town of Nevada where he practiced law. Two years later, he was elected district attorney of Nevada County.

In 1853, Searls returned to New York to marry his first cousin, Mary Corinthia Niles (b. 1830) of Rensselaerville, New York, and brought her back to Nevada City, traveling by steamer with their friends, Charles Mulford and his new bride, Deb. They have two young boys.

Elected on the Know Nothing ticket in 1857, he serves as judge of the 14th judicial district. 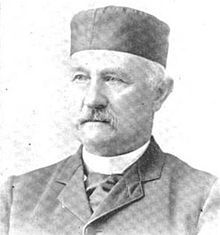