Major Allen is a “career officer” and USMA graduate. He is well-respected and well-known by the professional officer corps, and has a reputation as a master of logistics and military transport – whether by draft animal, cart or ship.

Robert Allen (b.March 15, 1811) was born in tiny West Point in Columbiana County, Ohio, and was educated in the public schools. He received an appointment to the United States Military Academy and graduated in 1836, ranking 33rd out of 49 cadets. He was assigned as a second lieutenant in the 2nd U.S. Artillery and assigned to garrison duty in various outposts.

He saw his first combat during the Mexican-American War, where he received a brevet promotion to major for his actions at the Battle of Cerro Gordo. Allen was transferred to the Quartermaster’s Department, and was eventually promoted to the chief quartermaster at Benicia, California, for the Department of the Pacific with the permanent rank of major – and has continued that role at the Presidio with the move of the Dept of California HQ to that location. 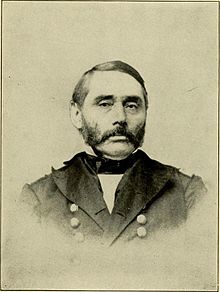