Vásquez is slightly built, about 5 feet 7 inches in height, and is fluent in both English and Spanish.

Vasquez was born in Monterey, Alta California in 1835 to Jose Hermenegildo Vásquez and Maria Guadalupe Cantua.

Vasquez came from an honorable family with a long history. His great-grandfather came to Alta California with the De Anza Expedition of 1776. Vasquez himself was born in handsome adobe home right behind Colton Hall in the fashionable part of Monterey. As a young man, he attended European style schools – and is well lettered and better spoken.

Vásquez fell into his present straights through association with Anastacio Garcia. Garcia is rumored to have been a member of the Joanquin Murietta outlaws. One night of heavy drinking at a fandango led to a fistfight which escalated and resulted in the death of Monterey Constable William Hardmount. Fearing imprisonment (or worse) the two of them fled the town.

Vásquez has always denied any involvement int he slaying, and claims his crimes were the result of discrimination by the norteamericanos and insist that he was a defender of mexicano rights. Most lawmen would say that whatever his reasons – the most important thing to know is that the two of them became leading enforcers in the Roach-Belcher feud, which reached its end when Garcia was executed by hanging in 1857.

By 1856, Vasquez was actively rustling horses and building up a band of his own. A sheriff’s posse caught up with him near Newhall, and he ended up behind bars in San Quentin prison serving a five-year sentence. There he helped organize, and participated in, four bloody prison breaks which left twenty convicts dead.

Life on the Run

In early 1858, he escaped from San Quentin and fled south. He is believed to be hiding out in the San Gabriel Mountains as leader of a bandito gang. Suspected members of the gang include his chief lieutenant Clodoveo Chavez, Tomas Redondo (“Procopio” or Red-Handed Dick) and Juan Soto. They have also been linked with Abdom Leiva and his wife Rosaria. 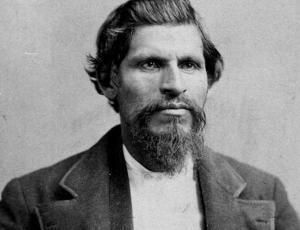