Born in Philadelphia in 1818, William Bringhurst married Ann Dillworth in 1845, and traveled to Utah with the John Taylor Company, arriving in 1847.

In 1855, Bringhurst was selected by Brigham Young as president of a new mission to the Las Vegas Valley. The journey from Salt Lake City took 30 days, with the last 55 miles from Muddy River to Las Vegas Valley through waterless desert. A total of 15 men, their wives and families made the trek.

On June 14th they reached the good water and grass of Las Vegas. “Their teams and their wagons were pretty well used up,” remarked their historian. Even so, some men dumped their other cargo, refilled water barrels, and headed back into the desert to help another party who were driving weaker teams. By nightfall on June 15th the last stragglers made it into camp.

The settlement at Las Vegas was to serve two purposes for the Mormons:

What drove men into the desert summer was not a matter of life and death, but of eternal life. Once assigned to teach their Mormon faith to the Indians of the Las Vegas Valley, they did not wait on a better season, but left almost at once.

Las Vegas was targeted for several reasons. The main road through Las Vegas, mislabeled as the “Old Spanish Trail” when John C. Fremont mapped it in 1844, became so important to Utah colonists that it was also called the “Mormon Road.”

Up that road came cuttings of California fruit trees, destined to bloom in Utah. Mormon converts from abroad landed at Pacific ports and traveled up the road to Utah. As early as 1851 church authorities envisioned a line of settlements, between the ports of the Pacific and Utah’s southern counties, to provide travelers with food, fodder, and blacksmith services.

The way stations also were to protect travelers and the mails from hostile Indians, and there may have been some hope of finding and exploiting minerals. And at the same time the missions would work to convert the Paiutes (who were considered to be the descendants of the Lamanites) and teach them farming and ranching.

Though the missionaries hoped to live peaceably among the Indians, laying out a fort was almost their first step, commenced on June 18. The location is three miles from Big Springs, but here Las Vegas Creek flowed down a hillside, allowing for a small water-powered mill.

Although farming began well, the alkaline soils caused crops to fail. Droughts in 1856 compounded the problems. Food shortages soured relations with the Indians as well, and there was livestock gone missing and barns and silos raided.

The discovery of lead nearby, at what is now called Mount Potosi, caused problems within the mission. In May 1856, Nathaniel V. Jones arrived in Las Vegas bearing orders from Young himself, and claiming authority to take men from the mission to work the mines. Bringhurst refused to accept Jones’ authority.

When food grew short, Bringhurst refused supplies to Jones’ mining party, encamped southwest of Las Vegas at the location which would later be named Potosi. He refused to send the mission blacksmith to the mines.

Jones returned to Salt Lake City to buy suitable material for an ore smelter. Returning Dec. 4, he bore a letter from Young, notifying Bringhurst that he had been “dropped from the mission and dis-fellowshipped from the Church.” (the Mormon equivalent of ex-communication)

One week later, Bringhurst started for California. He has only occasionally been heard from since then – and his current whereabouts are unknown.

With no food, no leadership and rising tensions, settlers abandoned Las Vegas Valley during the Utah War. 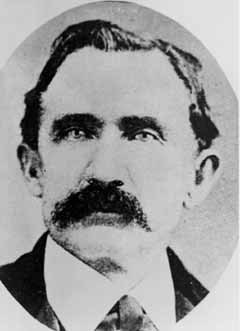