NOTE: some of these are not period (and assume events that haven’t happened) but are too good an insight into his character to exclude.

Fellow cadet William Rosecrans would later remember Sherman at West Point as “one of the brightest and most popular fellows” and “a bright-eyed, red-headed fellow, who was always prepared for a lark of any kind.”

Sherman wrote of his time at the Academy : “I was not considered a good soldier, for at no time was I selected for any office, but remained a private throughout the whole four years. Then, as now, neatness in dress and form, with a strict conformity to the rules, were the qualifications required for office, and I suppose I was found not to excel in any of these. In studies I always held a respectable reputation with the professors, and generally ranked among the best, especially in drawing, chemistry, mathematics, and natural philosophy. My average demerits, per annum, were about one hundred and fifty, which reduced my final class standing from number four to six.”

Sherman suffered from stress-related asthma because of the city’s aggressive business culture. Late in life, regarding his time in a San Francisco experiencing a frenzy of real estate speculation, Sherman recalled: “I can handle a hundred thousand men in battle, and take the City of the Sun, but am afraid to manage a lot in the swamp of San Francisco.” In 1856, during the vigilante period, he served briefly as a major general of the California militia.

Sherman was born in 1820 in Lancaster, Ohio, near the banks of the Hocking River. His father Charles Robert Sherman, a successful lawyer who sat on the Ohio Supreme Court, died unexpectedly in 1829. He left his widow, Mary Hoyt Sherman, with eleven children and no inheritance. After his father’s death, the nine-year-old Sherman was raised by a Lancaster neighbor and family friend, attorney Thomas Ewing, Sr., a prominent member of the Whig Party who served as senator from Ohio and as the first Secretary of the Interior. Sherman was distantly related to American founding father Roger Sherman and grew to admire him.

Sherman’s unusual given name has always attracted considerable attention. Sherman reported that his middle name came from his father having “caught a fancy for the great chief of the Shawnees, ‘Tecumseh.’” As an infant, Sherman was named simply Tecumseh. Sherman only acquired the name “William” at age nine or ten, after being taken into the Ewing household. His foster mother, Maria Willis Boyle (Maria Ewing), was of Irish ancestry and a devout Roman Catholic.

Senator Ewing secured an appointment for the 16-year-old Sherman as a cadet in the United States Military Academy at West Point, There Sherman excelled academically, but he treated the demerit system with .;indifference.

Upon graduation in 1840, Sherman entered the Army as a second lieutenant in the 3rd U.S. Artillery and saw action in Florida in the Second Seminole War against the Seminole tribe. He was later stationed in Georgia and South Carolina. As the foster son of a prominent Whig politician, in Charleston, the popular Lt. Sherman moved within the upper circles of Old South society.

While many of his colleagues saw action in the Mexican–American War, Sherman performed administrative duties in the captured territory of California. Along with fellow Lieutenants Henry Halleck and Edward Ord, Sherman embarked from New York on the 198-day journey around Cape Horn aboard the converted sloop USS Lexington. Due to the confined spaces aboard-ship, Sherman grew close to Halleck and Ord, and in his Memoirs references a hike with Halleck to the summit of Corcovado, notable as the future spot of the Cristo Redentor statue. Sherman and Ord reached the town of Yerba Buena, in California, two days before its name was changed to San Francisco. In 1848, Sherman accompanied the military governor of California, Col. Richard Barnes Mason, in the inspection that officially confirmed that gold had been discovered in the region, thus inaugurating the California Gold Rush. Sherman, along with Ord, assisted in surveys for the sub-divisions of the town that would become Sacramento.

Sherman earned a brevet promotion to captain for his “meritorious service”, but his lack of a combat assignment discouraged him and probably contributed to his decision to resign his commission.

In 1850, Sherman was promoted to the substantive rank of Captain and married his foster sister, Ellen Boyle Ewing, four years younger, in a Washington ceremony attended by President Zachary Taylor and other political luminaries. Thomas Ewing was serving as the Secretary of the Interior at the time.

In 1853, Sherman resigned his captaincy and became manager of the San Francisco branch of the St. Louis-based bank, Lucas, Turner & Co. He survived two shipwrecks and floated through the Golden Gate on the overturned hull of a foundering lumber schooner. Sherman’s friendship with Charles Wilson also lead to him being named as first president of the SVRR.

The financial panic in fall 1857 nearly drove the bank under. But operating profits were strong enough to allow a restructure of railroad equity and a new bond package – allowing both bank and railroad to continue operations.

IRL NOTE: This is counter-factual. Lucas & Turner failed in 1857 because of a real estate speculation bubble in San Francisco. Sherman left San Francisco in early 1858, returned to St Louis and then took a job at LSU in New Orleans. 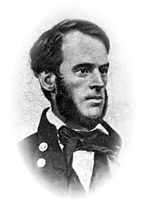