The San Francisco & San Jose Railroad (SFSJRR) was incorporated in 1859 to “provide rail service between the counties of San Francisco, San Mateo and Santa Cruz”. As a practical matter this means a railroad that runs south from San Francisco harbor, past Mission Bay, along the west side of the South Bay and terminates near San Jose.

The 1859 mini-game determined that the SFSJRR was able to obtain funding necessary to begin construction.

Players have expressed a strong interested in becoming investors in this railroad. 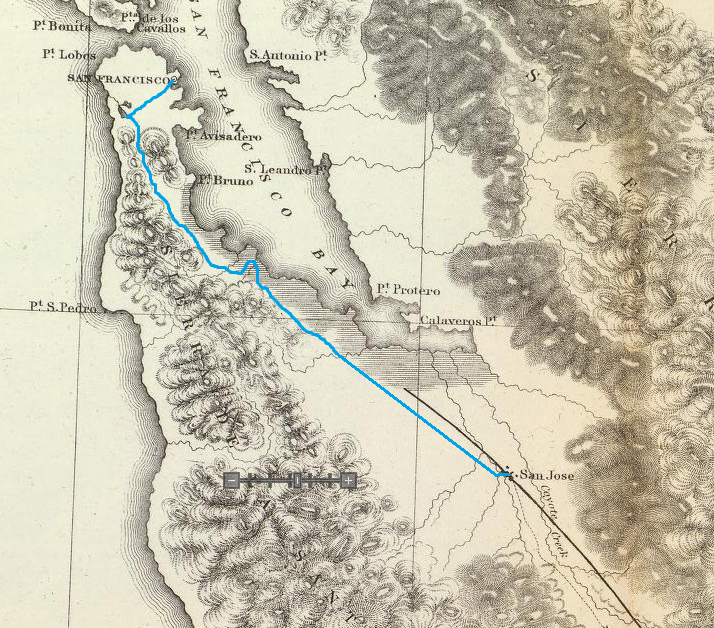 The railroad will follow this proposed route – roughly paralleling the El Camino Real.

NOTE: IRL this route would be developed in the late 1860s and 70s by the Southern Pacific Railroad as part of their mainline connecting San Francisco and San Diego.

Three parts of the plan are noteworthy.

Right of way in San Francisco proper proved difficult to secure and construction is delayed until summer. Track laying runs peaks at two miles per month (400 feet of track & 270 cross-ties per day). This rate is “good” considering the manual process and the limits imposed by the terrain, logistics, supplies of iron rails and timber – plus the difficulty of finding experienced manpower. The surveyors and engineers hope to accelerate track-laying once they hit the flat lands along the bay – perhaps up to 1 to 1.5 miles per week, or higher!

By the end of 1859 the railroad has completed a station at Lake Merced, with active work at a railhead going to the southeast. The railroad operates one full-size locomotive providing twice-daily local service along the line. Both passenger and freight service is available. A smaller “yard engine” built by the Union Iron Works handles traffic at the depot at San Francisco, and a dedicated engine is expected in early 1860 to haul supplies to the railhead.

The SFSJRR is owned by a consortium of California businessmen with extensive investment from “back East”. Michael Donahue serves as president, with Peter Donahue as chairman and Juana Briones de Miranda as secretary & land agent.

The company has raised $300,000 in working capital, including $75,000 in secured debt provided by the City of San Francisco itself.