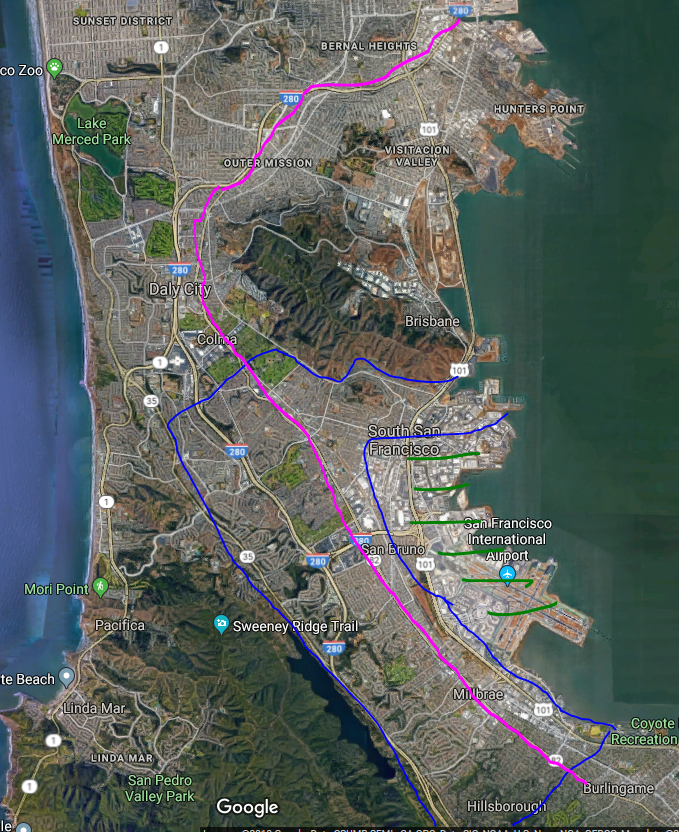 Rancho Buri Buri (also called Sánchez Rancho) was a 14,639-acre (59.24 km2) Mexican land grant in present-day San Mateo County, California, given in 1835 by Governor José Castro to José Antonio Sánchez. The name derives from the Urebure village of the Ramaytush speaking Yelamu tribe of Ohlone people who were settled by the banks of San Bruno Creek. Rancho Buri Buri extended between the north line of South San Francisco and the middle of Burlingame, and from the San Francisco Bay to the top of the Peninsula ridge and included present-day Lomita Park, Millbrae, South San Francisco, San Bruno, and the northern part of Burlingame.

Rancho Buri Buri was first established as grazing land for Mission Dolores and the Presidio of San Francisco. In 1827, Sub lieutenant José Antonio Sánchez, who was stationed at the Presidio, was granted permission by Mexican governor José María de Echeandía to occupy the rancho for “grazing and agricultural purposes”. The land grant was confirmed in 1835, by Governor Castro. Sánchez worked the land from the time it was granted to him until his death in 1843. Upon his death, the rancho lands were divided between his 10 children.

With the cession of California to the United States following the Mexican-American War, the 1848 Treaty of Guadalupe Hidalgo provided that the land grants would be honored. As required by the Land Act of 1851, a claim for Rancho Buri Buri was filed with the Public Land Commission in 1852, and the grants were provisionally patented by 1855 with José de la Cruz Sánchez (eldest son) as the primary grantor.

Jose Antonio Sanchez came to California with the De Anza Expedition in 1776 and was part of the development of inland routes from the southern bay to present-day San Francisco. Sanchez became a soldier at the San Francisco Presidio for many years. The rancho was granted to him in 1827, and he retired from active service in 1836 and died in 1843.

The second son (Francisco) was commandante of San Francisco Presidio and the alcalde of San Francisco in 1843. He was granted Rancho San Pedro (8,926 acres in northwest San Mateo) and is embroiled in legal battles on that land supporting the claim. He is also reported to be in poor health. 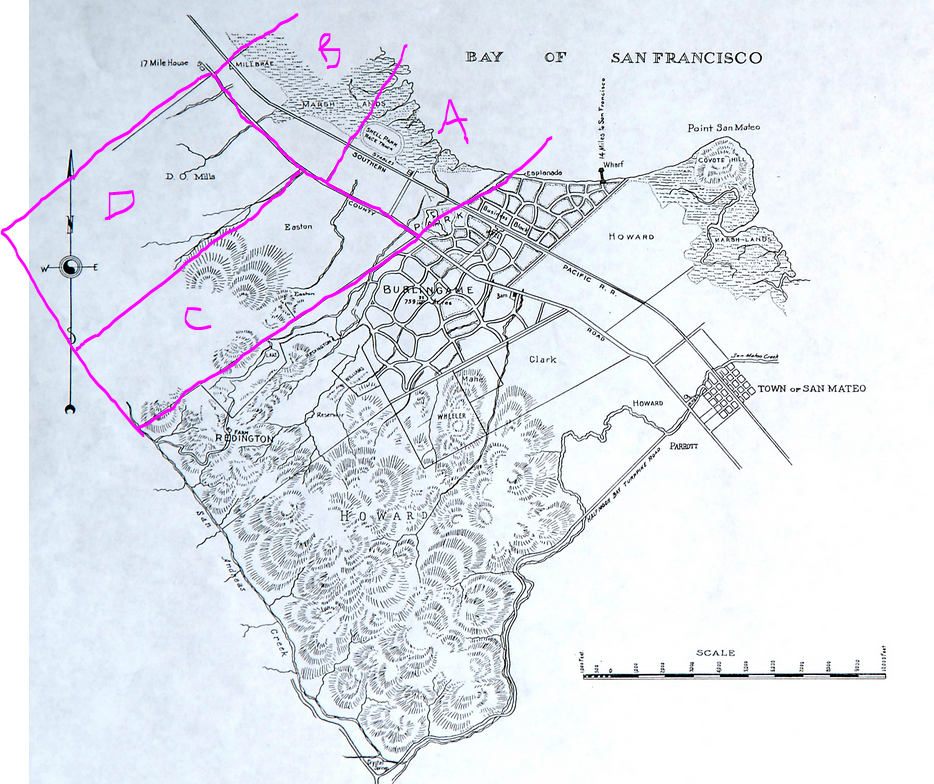 The Sanchez family is trying to quietly sell four lots on the southern end of Rancho Buri Buri as depicted in the map.

174 acres arable & 172 acres marsh. Two creeks and half of pond. The far eastern end has 300 feet of non-marsh bay frontage. (note: the racetrack is reclaimed marshlands, and only a half-mile – not big enough for Garrett’s needs)

300 acres arable & 760 acres light hills. Three creeks in the arable lands. The hills have two stands of oak in the southeast, and the southwest property line is along the San Andreas Creek.

400 acres arable & 600 acres light hills. Two creeks in the arable lands. The hills has a creek with a dangerous canyon that heads off to the northwest edge of Section C. The southwest edge has access to Laguna San Andreas and the creek that drains from it.

Garrett leverages his connections with the Peruvian “enforcers” and railroad connections to discover that the Juana Briones is looking for “frontmen” to gain access to right of way, timber and station building to support the San Francisco & San Jose Railroad.

Like most of the Mexican and Spanish land grants, this rancho was tied up in legal proceedings for years following the end of the Mexican-American War. The treaty (Treaty of Guadalupe Hidalgo) provided that land grants would be honored – but in practice there were delaying and harassing tactics used by the federal and state governments, as well as nordeamerico squatting on the land and treating it as valid homesteading.

Rancho Buri Buri’s location on El Camino Real made it particularly susceptible. The good transportation and frequent visitors meant that homesteaders and tradesman live along the property, and the road complicates the government/private ownership of right-of-way and easements.

Starting in the 1860s the property became interesting to wealthy San Franciscans looking for country estates and vacation homes. The mild weather with easy access to the bay made the southern tracts especially desirable. By the time the land claims were resolved, most of the rancho had been subdivided and sold off to pay property taxes, legal fees and loans.

The new owners of Rancho Buri Buri included Darius Ogden Mills, Ansel I. Easton and Charles Lux. Mills bought José de la Cruz Sánchez’s one-tenth of his father’s estate (1,500 acres (6 km2)), which is now Millbrae. Later, Mills and his brother-in-law, Ansel Ives Easton, acquired almost all of the land between Millbrae and San Bruno, west from El Camino Real, including the land on which San Francisco International Airport (originally Mills Field) presently stands. Charles Lux and a business partner, Alfred Edmondson purchased 1,700 acres (7 km2) of Rancho Buri Buri in 1853. Lux bought out Edmonson’s interest in 1856, and founded the town of Baden (northwest of modern-day South San Francisco). In 1855 Charles Lux bought 1,464 acres (6 km2) of Rancho Buri Buri land and became a partner of fellow San Francisco butcher and entrepreneur Henry Miller, forming the firm of Miller & Lux. It was on this property that Charles Lux built his family country home. Through his heirs, the Lux Ranch was sold to Peter E. Iler of Omaha, Nebraska, and became the site of the industrial city of South San Francisco.