In less than ten years since the first paddlewheel sailed on San Francisco Bay, these vessels have come to dominate the passenger and fast freight business in Northern California. As of 1858, there are over twenty modern paddleboats operating out of San Francisco, servicing almost all the navigable waters emptying into the Bay.

These complex marvels of modern engineering mainly of East Coast origin, primarily being manufactured out of New York. To make the journey, they were loaded up with wood and coal on every conceivable surface and sailed around the cape.

Only one local shipmaker is building vessels which can service the trade. J.G. North’s work is widely in demand – especially for smaller vessels that could never survive an ocean voyage allowing for passage through shallower waters and smaller specialized craft.

The largest can carry up to 100 tons of freight and dozens of passengers with both deck and cabin accommodations. The size also makes the trip affordable. For convenience and planning purposes, all intra-bay traffic is priced as follows: 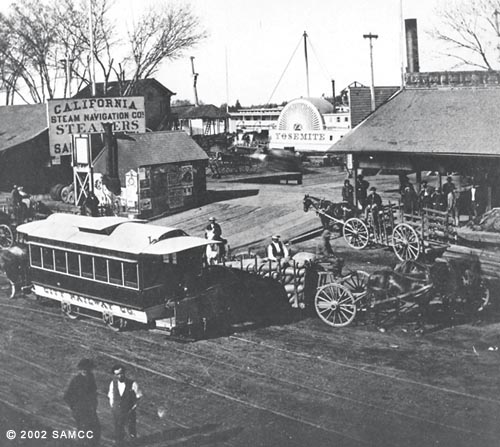 In 1854, a group of steamship captains organized the CSNC to provide schedule coordination, avoid unnecessary competition and ensure the continued profitability of their vessels under the visionary leadership of their president Samuel J. Hensley.

The consortium quickly grew and in 1857 they won the exclusive mail contract for transport between San Francisco, Sacramento and Stockton. Only a few years later their fleet dominates traffic in the San Francisco Bay and surrounding waterways out of their major wharf on Jackson St. 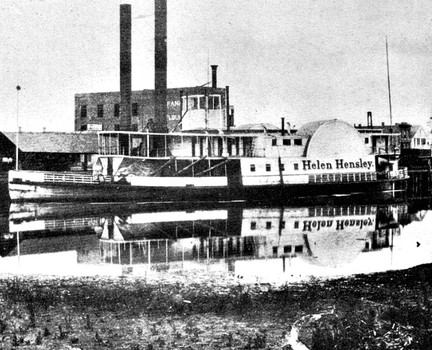 Two CSNC steamers leave daily at 4pm from Jackson St – one each headed to Sacramento and Stockton. The Stockton boat makes a local stop at Vallejo on the outbound, and both with make a local stop on the return. The steamers continue overnight arriving at their destination in the early morning.

In Sacramento, the CSNC provides transfer to smaller, light-draft steamers for continued service to Marysville/Yuba City, Colusa and Red Bluffs. They also maintain connecting service to Folsom via the SVRR and stagecoach traffic to many destinations in the Gold Country.

In Stockton, transfer allows continued service to Modesto and Merced with intermittent service to Fresno depending on river conditions (esp during the “June Rise”). On the way you are likely to spot boats abandoned by eager future miners during the midst of the Gold Rush – making it one of the strangest navigation hazards anywhere.

The independent steamer MARIA (Capt C. Mills) runs to Sacramento on Tues & Thu and Sacramento & Marysville on Saturday. Though many question how much longer they can continue to compete with the CSNC.

Service is provided regularly from San Francisco to the following destinations

Puget Sound & British Columbia – The northern gold rush is an opportunity for businessmen of all stripes. Abraham Turnure and J.P. Gannett have moved their business from Bay Area traffic to supporting British Columbia. Their steamer William G Hunt now shuttles passengers and equipment from San Francisco to Puget Sound and Fort Victoria – while the smaller Confidence manages traffic between Fort Victoria and destinations on the Fraser River. Assisting them are the smaller sailing ships of their fleet – the barques Albree & Apthorp, and the brigs Globe & Tuskina.