The year is 1857, and the setting is Northern California. More immigrants arrive every year. Gold and silver still come out of the mountains, but the new strikes are smaller and some mines are starting to play out. 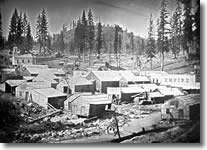 The story opens in Nevada, California (later called “Nevada City”) also known as Coyoteville or Dry Diggings. Nevada is a Gold Rush town, built on the Deer Creek tributary of the Sacramento River and nestled in the foothills of the Sierra Nevada. In 1851 she was the third largest town in the state, but five years later fire destroyed most of the buildings and now the mines are starting to play out.

This town ain’t been so good to you. You are out of a job and out of luck. Whether you have been in town a day or a decade, you have few friends and no prospects. To make matters worse, Nevada means “snow-covered” and the nights are already starting to get chilly. The last group of immigrants should be coming over the Donner Pass in the next week or two. After they pass through, everyone will likely tie down for the winter.

Maybe it is time to leave. The land is full of God’s own beauty, but the town is mean as sin.

But for tonight you have a warm place to sleep and a few coins in your pocket. Enough to have a good time at the Hotel de Paris