The gold pulled out of California is easier to get to and higher quality than many established gold fields in the Old World. This has led to an explosion in gold mining in northern California. In 1846, the annual world gold production was around 1.4 million troy ounces. By 1850 at least a million ounces a year is coming out of California, and production has continued to grow through the decade trending to over three million ounces per year by 1860.

There are two official currencies in circulation in the United States at the start of the campaign.

• Bullion Coinage – The US Mint in San Francisco produces millions of coins annually. Most of them are .25 to 1 ounce gold – the half-eagle ($5), eagle ($10) and double eagle ($20). These coins are a 22-carat alloy of gold with the remainder a lesser material (silver). Smaller denomination coins are largely minted back east in New Orleans and Philadelphia. The US Mint also operates facilities in Charlotte, North Carolina and Dahlonega, Georgia – the sites of the first two gold rushes in US history.

• Banknotes – There is no national banking system, and two attempts to establish a national bank have failed. Each state operates its own separate banks and banking institutions, and every banknote is essentially a negotiable implement. Newly arrived settlers often discover their $5 State Bank of Indiana notes will only buy $2 worth of gear in California (if they are accepted at all, since counterfeiting is easy with all the multiple designs in circulation and bank failures are common).

Seriously – here is a face-value identical example. Which would you trust more ??

In addition, there are two other common forms of gold that are worth mentioning because they can be treated like more like currency than “commodities” or barter goods.

• Bullion Ingots – Any large-scale operation will cast their gold and silver into ingots at the end of the extraction process. They are easier to transport and store, simpler to inventory, and harder to lose. You can also prove provenance by the serial number and manufacturer stamped on the face – while a bag of dust could belong to anyone.

• Gold dust– the individual prospector and small-time placer mining operation will mine gold flakes and smaller nuggets. Some mine operators will pay their employees directly in dust as well.

RESOLUTE is set in 1857, so prices and wages have declined from the astronomical levels in the early 1850s. Typical wages for a seasoned miner may be $2 per day or more, and greenhorns may earn as little as a $1.50. But the company store and rent from the mine owner’s boarding house will take most of that back, and a typical worker may have an ounce of dust as their monthly discretionary income.

The basics of Gold Mining 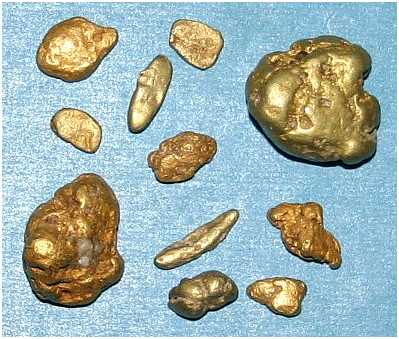 The first gold claims were found by “placer mining” – from the Spanish placer meaning “alluvial sand”. Placer deposits are loose particles of gold metal which are freed by erosion and then concentrated by gravity. These are the deposits most easily located and worked by the individual prospector. 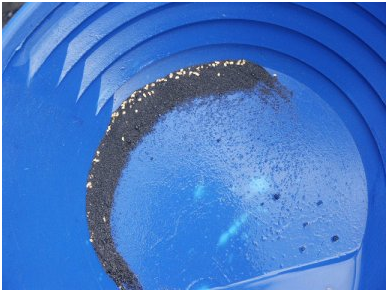 Gold is a very dense metal, so any particles in stream deposits tend to collect in crevices or pockets in the bedrock or at sand and gravel bars where the stream current slows. These will mix in with other heavy minerals in the stream including the much more common “black sand” made of weathered hematite and magnetite (oxidized iron). 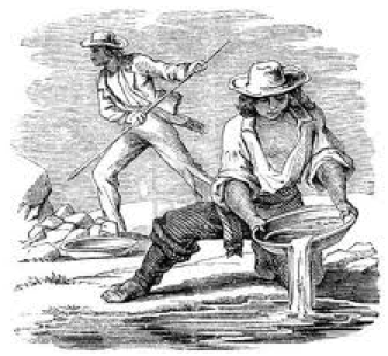 Prospectors look where black sands are concentrated especially the inside bends of streams, near outcropping sections of bedrock and downstream from large boulders. Initial investigation is done by “panning for gold” i.e. scooping up water and gravel into a large flat pan and examining the contents. 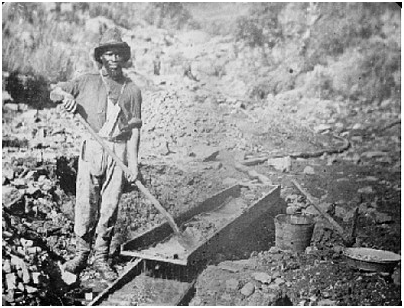 More complicated devices called “rockers” or “sluices” allow a miner to sift through larger volumes of sand or gravel, but they all rely on moving water and the heaviness of gold.

Eventually, large mechanical dredges are used to process all of the gravel, sand and mud in a profitable river bed. The waste product (“tailings”) is either released back into the stream or thrown onto a pile that can be dozens of feet high. 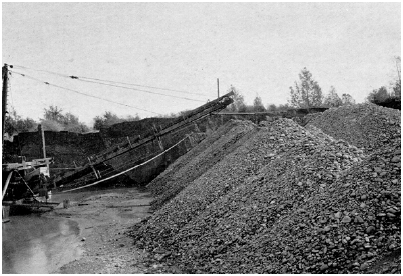 All of this back-breaking work may result in only one or two flakes per pan. The prospector will pan until he finds a strike then work areas along the stream, generally moving upstream until he reaches the point where the gold no longer appears. At that point, the prospector searches the surrounding hill side to find the exposed outcropping that is the source of the desired ore. If he succeeds, then there is the potential for a profitable mining claim.

Hydraulic mining is the next stage. Steam-powered shovels are used to dig pits and expose gravel ridges. Then giant hoses are used to spray the loose gravel into aqueducts and pipelines. The mixture is crushed and chemically treated, then travels through sluices to separate the gold from the tailing.

Less than half of all gold is mined this way, and the proportion is declining.

Hard-Rock Mining – or “The Search for the Mother Lode” 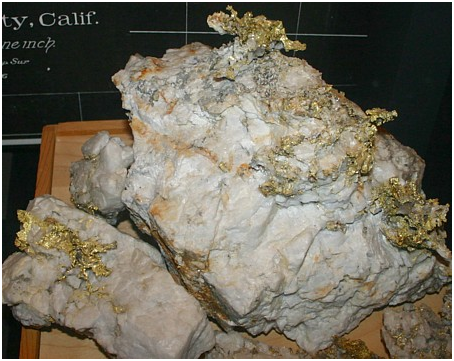 All of these alluvial deposits were eroded from the original “lode ore”. Most gold comes from an “impurity” in a thicker band of quartz. The gold may be mixed with other valuable metals including silver, mercury, copper and sometimes lead. In California, not only does the quartz contain a large amount of these minerals but a higher proportion is gold.

Hard-rock mining requires significant capital investment and the work of dozens or hundreds of employees – but it is the only way to get at this gold-bearing “mother lode”. Miles of tunnels have been dug in Northern California, all braced with timber from local forests. The raw ore must be dug up from deep shafts after being loosened with explosives. The ore is loaded into buckets and ore cars, then carried to stamp mills for crushing. Water and gravity are used to mechanically separate most of the quartz, then mercury is used to chemically separate the gold from the remaining fine powder. 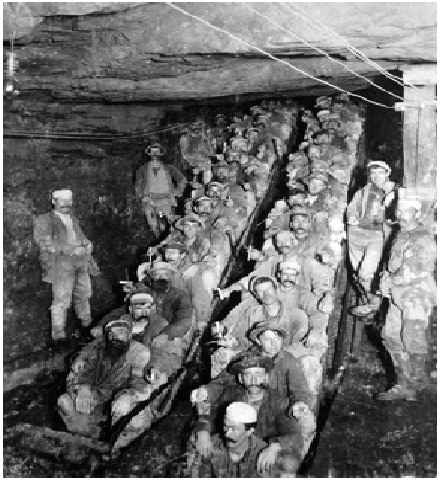 All forms of mining are labor-intensive – but hard-rock mining is also extremely dangerous. Explosions, cave-ins, and flooding can happen at any time. Plus the silent killers of poison gas, mercury poisoning and oxygen deprivation are never far away.

On the positive side, hard-rock mining can be much more profitable (for the claim owners) – and done responsibly will be less damaging to the local environment than open-pit mining and hydraulics. It is not just “out of sight out of mind” – the local mining towns truly resent the hydraulic mines which destroy fishing and foul the water supply.