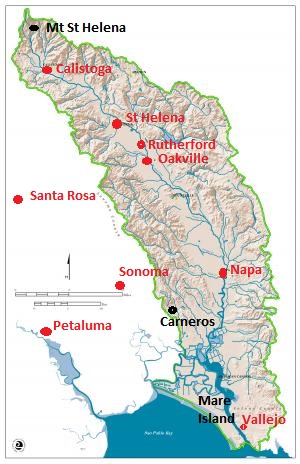 The Napa River rises in northwestern Napa County just south of the summit of Mt. St. Helena in the Mayacamas Mountains of the California Coast Ranges. The source begins as a seasonal creek at an elevation over 3,000 and descends the southern slope of Mt. St. Helena to Kimball Canyon. It flows south entering the head of the slender Napa Valley north of Calistoga. In the valley, it flows southeast past Calistoga, St Helena, Rutherford, Oakville and through Napa, its head of navigation.

Downstream from Napa, the river forms a tidal estuary. The main navigation point runs south along the Mare Island Strait and enters San Pablo Bay (the northern lobe of the San Francisco Bay) at Vallejo.

The river supports a remarkable diversity of fishes especially steelhead trout, chinook and coho salmon, lampreys, Tule perch and Sacramento splittails – and is home to numerous the golden beaver.

The Upper Napa Valley was once the home of a significant population of Indigenous People, called the Wappo during the Spanish colonial era of the late 18th century. With abundant oak trees providing acorns as a food staple and the natural hot springs as a healing ground Calistoga (Wappo: Nilektsonoma, “Chicken Hawk Place”) was the site of several villages. Following Mexican Independence, mission properties were secularized and disposed of by the Mexican government with much of the Napa Valley being partitioned into large ranchos in the 1830s and 1840s. The first Anglo settlers began arriving in the 1840s, with several taking up lands in the Calistoga area.

Nicholas Higuera was a soldier in San Francisco from 1819–1823, and alcalde at Sonoma. In 1836 he was given two major land grants by the Governor of Alta California – the one square league (7000 acre) Rancho Entre Napa, and the 2,588-acre Rancho Rincon de los Carneros.

Rancho Entre Napa runs along the west bank of the Napa River from the town of Napa south to Carneros Creek.

Unlike most Mexican land grants in California that remained intact at the end of the Mexican era, Rancho Entre Napa was sudivided. Higuera subdivided and sold much of the land in 1847, retaining 877 acres for himself. With the cession of California to the United States following the Mexican-American War, the 1848 Treaty of Guadalupe Hidalgo provided that the land grants would be honored. As required by the Land Act of 1851, 16 claims were filed with the Public Land Commission in 1852 for 14 tracts of Rancho Entre Napa and 2 tracts of Rancho Rincon de los Carneos.

Agriculture along the Napa River

The southern end of the valley has remained largely a ranching interest but land north of Napa itself has been settled by farmers planting wheat, sorghum and barley. Dr Edward Bale operates the sole grist mill along the river just north of Calistoga. [NOTE: there is speculation that Bale was a key figure in the planning of the Bear Flag Revolt, but that has never been proven]

John Patchett has been leading efforts to grow cash crops in the area, and has planted 16 acres of vineyards. He recently enticed Charles Krug to serve as winemaker in the expected first crush, and has been consulting with Agosto Haraszthy from Sonoma.

Mining along the Napa River

Placer miners have looked at pretty near every creek along the river, and no gold has been found. But there are rumors that prospectors have found galena ore near Calistoga – which could mean lead and silver! 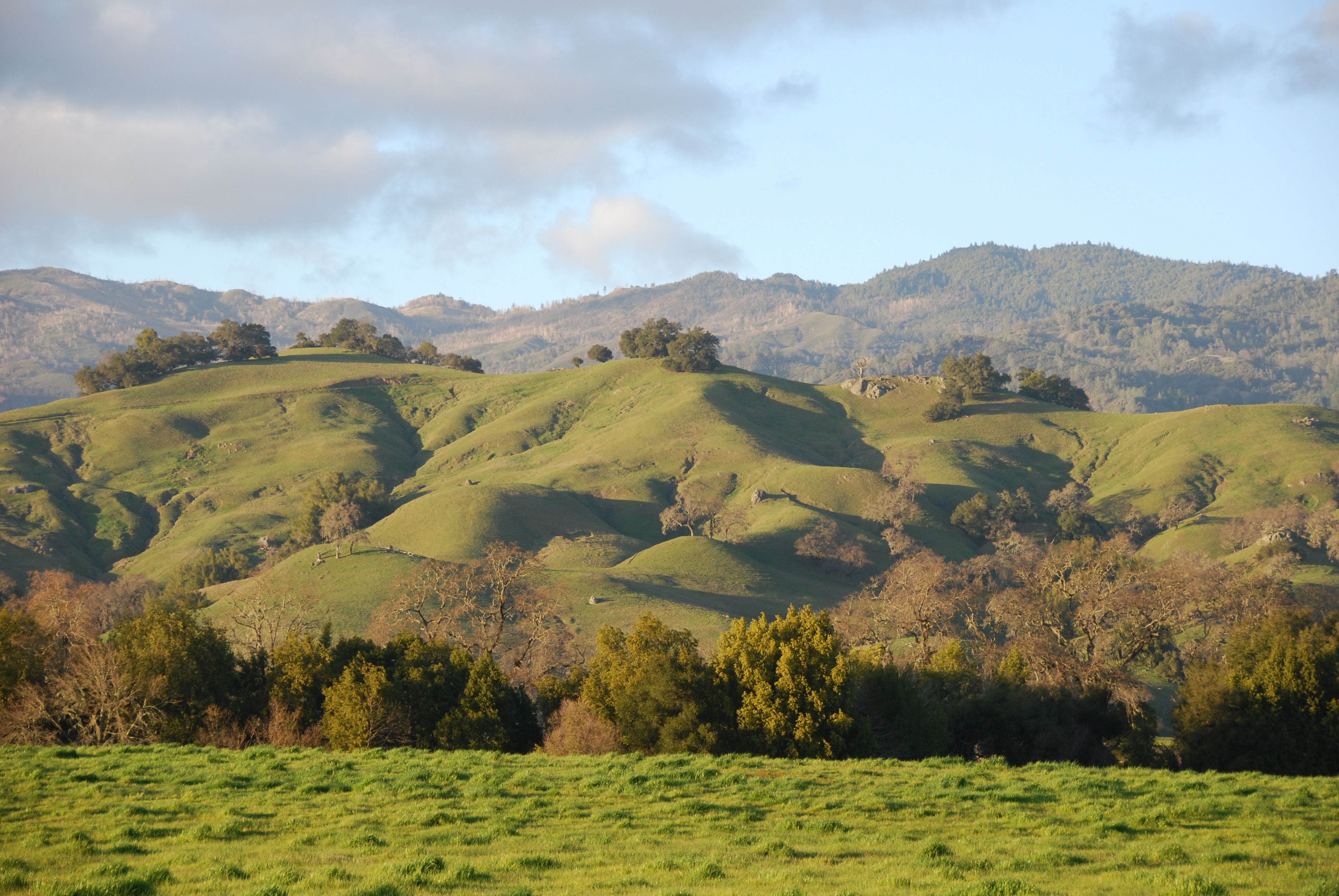 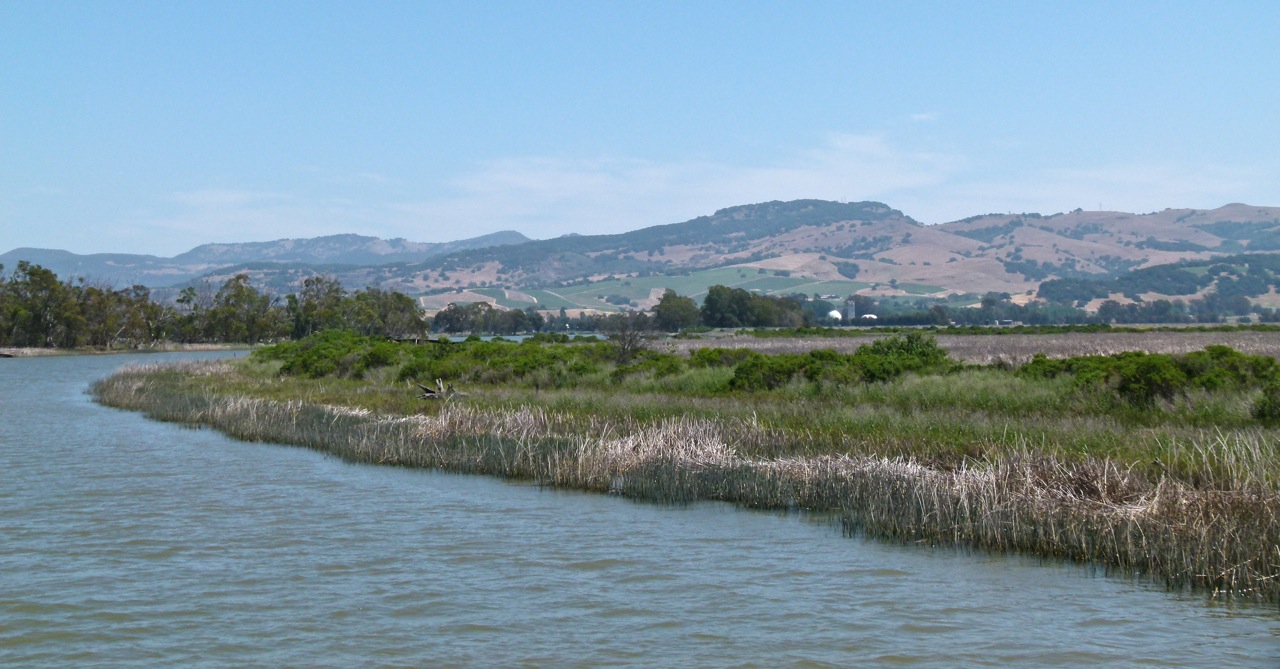 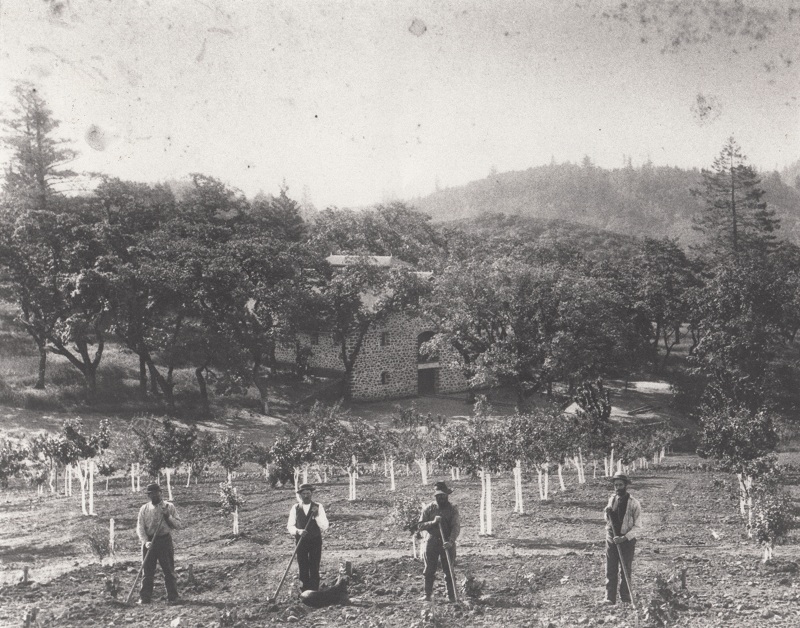